Items related to Mathematics of Linear and Nonlinear Systems: For Engineers... 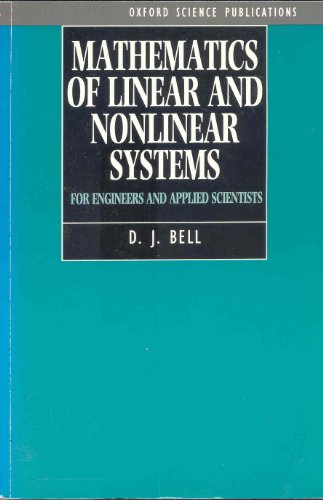 Dynamical systems are evident in many aspects of daily life and occur either as controlled systems like a piloted aircraft or uncontrolled systems such as the solar system). Many dynamical systems can be described mathematically and the resulting mathematical models are usually nonlinear. These models can often be linearized and yet still reflect the essential features of the real systems. During the last 30 years, the mathematical theory for linear and nonlinear, controlled and uncontrolled, and continuous and discrete mathematical models has been formulated using highly sophisticated mathematics. The background mathematical knowledge required to understand this modern formulation is not normally acquired by graduates in subjects other than mathematics. Nearly all the relevant books have been written by mathematicians, for mathematicians, and nonmathematicians often have considerable difficulty in approaching the subject. This book presents, in a convenient single volume ideal for nonmathematicians, much of the mathematical background necessary for the study of modern developments in linear and nonlinear system theory. Six chapters cover algebraic topics that have been instrumental in the establishment of linear system theory, including groups, rings, modules, and vector spaces. The last five chapters deal with those parts of analysis which lead to a geometric approach to nonlinear system theory that has been particularly successful in yielding important results since about 1970. With many examples, notes and exercises with solutions, this work can be used as either a textbook or reference.

Shipping: US$ 10.44
From United Kingdom to U.S.A.
Destination, rates & speeds

2. MATHEMATICS OF LINEAR AND NONLIN