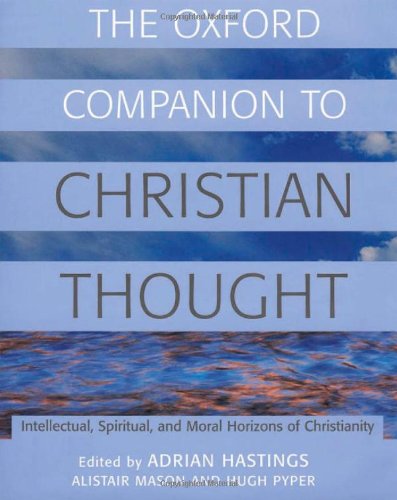 Embracing the viewpoints of Catholic, Protestant, or Orthodox thinkers, of conservatives, liberals, radicals, and agnostics, Christianity today is anything but monolithic or univocal. In The Oxford Companion to Christian Thought, general editor Adrian Hastings has tried to capture a sense of the great diversity of opinion that swirls about under the heading of Christian thought. Indeed, the 260 contributors, who hail from twenty countries, represent as wide a range of perspectives as possible.
Here is a comprehensive and authoritative (though not dogmatic) overview of the full spectrum of Christian thinking. Within its 600 alphabetically arranged entries, readers will find lengthy survey articles on the history of Christian thought, on national and regional traditions, and on various denominations, from Anglican to Unitarian. There is ample coverage of Eastern thought as well, examining the Christian tradition in China, Japan, India, and Africa. The contributors examine major theological topics such as resurrection, the Eucharist, and grace as well as controversial issues such as homosexuality and abortion. In addition, short entries illuminate symbols such as water and wine, and there are many profiles of leading theologians, of non-Christians who have deeply influenced Christian thinking, including Aristotle and Plato, and of literary figures such as Dante, Milton, and Tolstoy. Most articles end with a list of suggested readings and the book features a large number of cross-references.
The Oxford Companion to Christian Thought is an indispensable guide to one of the central strands of Western culture. An essential volume for all Christians, it is a thoughtful gift for the holidays.

For The Oxford Companion to Christian Thought, the editors gathered together over 250 scholars, mostly British or American, including what one might call a "celebrity" contributor or two. There's an article each by the archbishop of Canterbury and his predecessor. As one would expect from an Oxford Companion, it is a collection of impressively thoughtful, scholarly, perhaps slightly stodgy, brief summaries of academia's collected erudition on a broad selection of big subjects. That said, it aims to be more at the level of the general reader than, say, The Oxford Dictionary of the Christian Church, with fewer and longer articles and briefer reading lists.

The book is unable to be as much of a compendium of consensus as such standard reference works usually are because in many cases there is no consensus to record. The editors' have invited contributors with a sympathy for a particular subject to write on it, and this one volume contains a multitude of viewpoints--all expressed within the courteous and cautious limits of the academically respectable and predominantly from theologically liberal perspectives. The angles of approach of the articles on, for example, evangelicalism, homosexuality, and Thomas Aquinas reflect the vastly diverging views of different parts of the Christian world, some more orthodox than others. These differences add an extra level of interest to what is destined to be a standard reference for a long time to come. --David Pickering, Amazon.co.uk

3. The Oxford Companion to Christian Thought

4. The Oxford Companion to Christian Thought.

5. The Oxford Companion to Christian Thought

Shipping: US$ 45.75
From United Kingdom to U.S.A.
Destination, rates & speeds