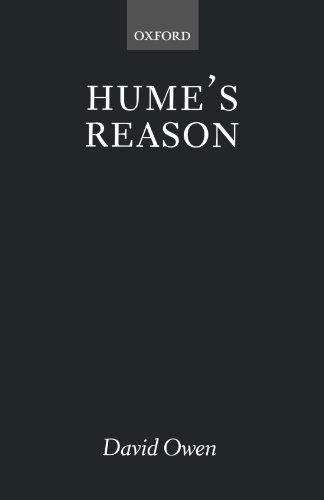 David Owen explores Hume's account of reason and its role in human understanding, seen in the context of other notable accounts by philosophers of the early modern period. Owen offers new interpretations of many of Hume's most famous arguments, about demonstration and the relation of ideas, induction, belief, and scepticism. Hume's Reason will be illuminating not just to historians of modern philosophy but to all philosophers who are concerned with the workings of human cognition.

David Owen is Associate Professor of Philosophy at the University of Arizona. He taught previously at Oxford and Columbia Universities.

"This book richly deserves the attention of Hume scholars, of historians of philosophy, of epistemologists, and of cognitive scientists...the elements of the picture [of Hume] are tied together in a very satisfying way... Owen provides a most enlightening explanation of what Hume considered to be the true reasons for this preference. I invite readers to see and appreciate the whole picture for themselves." --Journal of the History of Philosophy

"In this significant contribution to the history of logic and exemplary work of contextual exegesis, David Owen shows that the early modern conception of reasoning was radically different from our own and applies this insight to the interpretation of Hume... It ought to be read not just by Hume scholars, but by anyone interested in early modern philosophy or the history of logic."--Philosophy and Phenomenological Research

Shipping: US$ 10.80
From United Kingdom to U.S.A.
Destination, rates & speeds