Items related to Putting Logic in Its Place: Formal Constraints on Rational...

Putting Logic in Its Place: Formal Constraints on Rational Belief 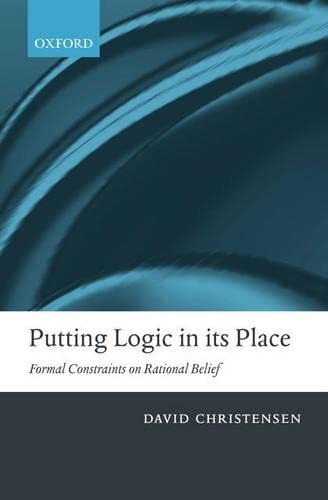 What role, if any, does formal logic play in characterizing epistemically rational belief? Traditionally, belief is seen in a binary way -- either one believes a proposition, or one doesn't. Given this picture, it is attractive to impose certain deductive constraints on rational belief: that one's beliefs be logically consistent, and that one believe the logical consequences of one's beliefs. A less popular picture sees belief as a graded phenomenon. This picture (explored more by decision-theorists and philosophers of science thatn by mainstream epistemologists) invites the use of probabilistic coherence to constrain rational belief. But this latter project has often involved defining graded beliefs in terms of preferences, which may seem to change the subject away from epistemic rationality.

Putting Logic in its Place explores the relations between these two ways of seeing beliefs. It argues that the binary conception, although it fits nicely with much of our commonsense thought and talk about belief, cannot in the end support the traditional deductive constraints on rational belief. Binary beliefs that obeyed these constraints could not answer to anything like our intuitive notion of epistemic rationality, and would end up having to be divorced from central aspects of our cognitive, practical, and emotional lives.

But this does not mean that logic plays no role in rationality. Probabilistic coherence should be viewed as using standard logic to constrain rational graded belief. This probabilistic constraint helps explain the appeal of the traditional deductive constraints, and even underlies the force of rationally persuasive deductive arguments. Graded belief cannot be defined in terms of preferences. But probabilistic coherence may be defended without positing definitional connections between beliefs and preferences. Like the traditional deductive constraints, coherence is a logical ideal that humans cannot fully attain. Nevertheless, it furnishes a compelling way of understanding a key dimension of epistemic rationality.

David Christensen is in the Department of Philosophy, University of Vermont.

"In this book, Christensen has made important contributions to our understanding of epistemology and the epistemology of deductive logic and has done so in a surprisingly accessible way. His book is essential reading for rationalists about deductive logic, including classical rationalists, practical probabilists, and epistemic probabilists." --Notre Dame Philosophical Reviews