Items related to Aquinas on Being

Kenny, Anthony Aquinas on Being 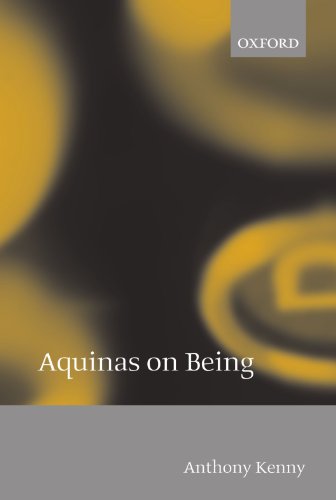 Anthony Kenny offers a critical examination of Thomas Aquinas's influential account of being, arguing that it suffers from systematic confusion. Because of the centrality of the doctrine, this has implications for other parts of Aquinas's philosophical system. Kenny's clear and incisive study dispels the confusion and offers philosophers and theologians a guide through the labyrinth of Aquinas's ontology.

Sir Anthony Kenny was formerly President of the British Academy, and Pro-Vice-Chancellor of the University of Oxford. His recent work includes a magisterial new history of Western philosophy, to be published by OUP in four volumes.

"Kenny is tenacious and clear-eyed.... Kenny's work is exemplary in its rigorous scholarship and careful analysis. He both perspicuously explicates Aquinas's thought on esse and demonstrates some of the difficulties embedded in this conception."--The Journal of Religion

Book Description Condition: New. Clarendon Press, 2005. 224p. Paperback. Anthony Kenny's treatment breathes love, care and respect for Aquinas from beginning to end. The thoroughness of his chronological examination of the spread of texts to be contended with and his painstaking analyses make the book solidly useful as a work of reference. David Braine, University of Aberdeen (Publisher's information). Condition: New. 1. Seller Inventory # 37982