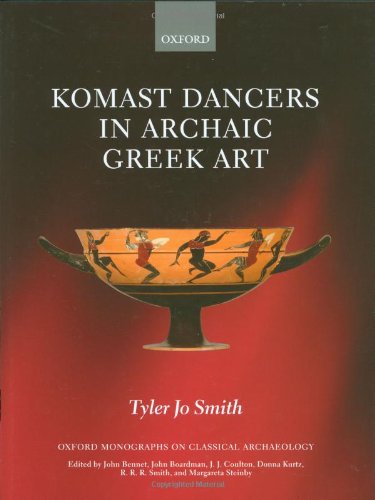 Komast figures (literally "revellers") on black-figure vases have long been associated with the worship of Dionysos and the origins of Greek drama. In this fully illustrated study, Tyler Jo Smith takes a fresh look at the evidence for komasts, both on vases and in other artistic media produced throughout Archaic Greece. She concludes that the meaning of the dancing figures differs between different regions, such as Corinth, Athens, and Laconia. Komasts are instrumental to the spread of the human figure in early Archaic Greek art and a vital link in the story of both visual and festival culture in Greece during the sixth century BC.

Tyler Jo Smith is Assistant Professor of Classical Art and Archaeology at the University of Virginia.

"Smith's study offers an important contribution to the interpretation of the Komast and their place in the corpus of Greek vases. The wide range of material assessed, and the concise and logical manner of interpretation permits the reader to draw his or her own conclusions on the nature and function of the vases, whilst offering a clear understanding of the Komast figures and their many variations."--Kirsten M. Bedigan, Classical Journal