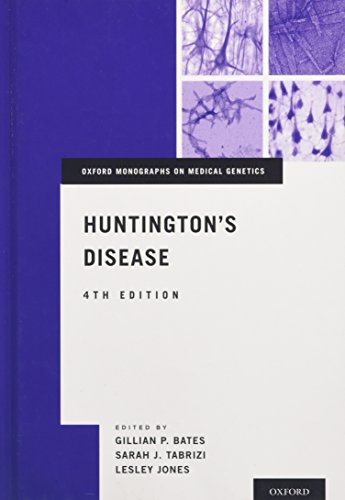 This fourth edition of Huntington's Disease presents a comprehensive summary of the current knowledge of this disease, including the major scientific and clinical advances that have occurred since publication of the third edition in 2002.

Completely updated and expanded, chapters in this volume are organized in five sections:

· The genetics of Huntington's disease, including new information on its epidemiology discussions of new testing guidelines

· Neurobiology, including recent insights into correlations between pathology and symptoms and a new chapter on neuronal circuitry

Professor Gillian Bates obtained her PhD from the University of London in 1987. Her postdoctoral work was conducted with Hans Lehrach at the ICRF on the cloning of the Huntington's disease gene. Her work has at the forefront of Huntington's disease research since establishing her independent research programme in 1994.

Professor Lesley Jones obtained her PhD from Cardiff University in 1990 and moved to the then University of Wales College of Medicine in 1994 to work on the biochemistry of huntingtin in HD. Her work has primarily been concerned with the notable downstream effects of mutant huntingtin on gene expression. She is also leading work on genetic modifiers of HD to assist in the identification of molecular pathways important in disease pathology.

Sarah Tabrizi is Professor of Clinical Neurology in the Department of Neurodegenerative Diseases at the UCL Institute of Neurology and Honorary Consultant Neurologist at the National Hospital of Neurology and Neurosurgery. Her research focuses on the pathobiological, translational and clinical aspects of neurodegeneration with a major focus on Huntington's disease. Sarah leads two major, international multidisciplinary research initiatives, TRACK-HD and Track-On HD, aimed at understanding the neurobiology of the neurodegenerative changes in premanifest and early stage HD gene carriers and identifying sensitive measures of disease progression.

Shipping: US$ 43.93
From United Kingdom to U.S.A.
Destination, rates & speeds