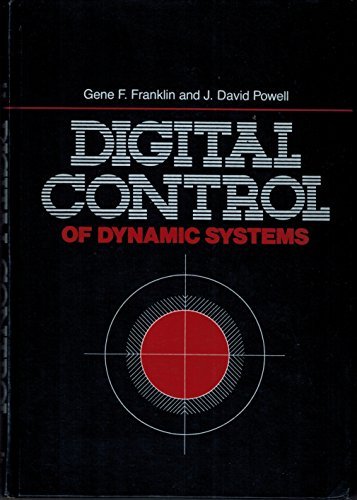 This well-respected, market-leading text discusses the use of digital computers in the real-time control of dynamic systems. The emphasis is on the design of digital controls that achieve good dynamic response and small errors while using signals that are sampled in time and quantized in amplitude. Both classical and modern control methods are described and applied to illustrative examples. The strengths and limitations of each method are explored to help the reader develop solid designs with the least effort. Two new chapters have been added to the third edition offering a review of feedback control systems and an overview of digital control systems. Updated to be fully compatible with MATLAB versions 4 and 5, the text thoroughly integrates MATLAB statements and problems to offer readers a complete design picture. The new edition contains up-to-date material on state-space design and twice as many end- of-chapter problems to give students more opportunities to practice the material.

This book is about the use of digital computers in hte real-time control of dynamic systems such as servomechanisms, chemical processes, and vehicles that mover over water, land, air or space. The material requires some understanding of controls. The special topics of discrete and sampled-data system analysis are introduced, and considerable emphasis is given to the z-transform and the close connections between the z-transform and the Laplace transform.

The book's emphasis is on designing digital controls to achieve good dynamic response and small errors while using signals that are sampled in time and quantized in amplitude. Both transform (classical control and state-space (modern control) methods are described and applied to illustrative examples. the transform methods emphasized are the root-locus method of evans and frequency response. The root-locus method can be used virtually unchanged for the discrete case; however, Bode's frequency response methods require modification for use with discrete systems. The state-space methods developed are the technique of pole assignment augmented by an estimator (observer) and optimal quadratic loss control. The optimal control problems use the steady-state constant-gain solutions; the results of the separateion theorem in the presence of noise are stated but not proved.

Each of these design methods-classical and modern alike - has advantages and disadvantages, strengths and limitations. It is our philosophy that a designer must understand all of them to develop a satisfactory design with the least effort.

Closely related to the mainstream of ideas for designing linear systems that result in satisfactory dynamic response are the issues of sample-rate selection, model identification, and consideration of nonlinear phonomena. Sample-rate selection is discussed in the context of evaluating the increase in a least-squared performance measures as the sample rate is reduced. The topic of model making is treated as measurment of frequency response, as well as least-sqwuared parameter estimation. Finally, every designer should be aware that all models are nonlinear and be fimiliar with the concepts of the describing functions of nonlinear systems, methods of studying stability of nonlinear systems, and the basic concepts of nonlinear design.

Material that may be new to the student is the treatment of signals which are discrete in time and amplitude and which must coexist with those that are continuous in both dimensions. The philosophy of presentation is that new material should be closely related to material already familiar, and yet, by the end, indicate a direction toward wider horizons. This approach leads us, for example, to relate the z-transform to the Laplace transform and to describe the implications of poles and zeros in the z-plane to the known meanings attached to poles and zeros in the s-plane. Also, in developing the design methods, we relate the digital control design methods to those of continuous systems. For moer sophisticated methods, we present the elementary parts of quadratic-loss Guassian design with minimal proofs to give some idea of how this powerful method is used and to motivate further study of its theory.

The use of computer-aided design (CAD) is universal for practicing engineers in this field, as in most other fields. We have recognized this fact and provided guidance to the reader so that learning the controls analysis material can be integrated with learning how to compute the answers with Matlab, the most widely used CAD software package in universities. In many cases, especially in the earlier chapters, actual Matlab scripts are included in the text to explain how to carry out a calculation. In other cases, the Matlab routine is simply named for reference. All the routines given are tabulated in Appendix E for easy reference; therefore, this book can be used as a reference for learning how to use Matlab in control calculations as well as for control systems analysis. In short, we have tried to describe the entiere process, from learning the concepts to computeing the desired results. But we hasten to add that it is mandatory that the student retain the ability to compute simple answers by hand so that the computer's reasonableness can be judged. The First Law of Computers for engineers remains "Garbage In, Garbage Out."

Most of the graphical figures in this third edition were generated using Matlab® supplied by The Mathworks, Inc. The files that created the figures are available from Addison Wesley Longman at ftp.aw or from The Mathworks, Inc. at ftp.mathworks/pub/books/franklin. The reader is encouraged to use these Matlab figure files as an additional guide in learning how to perform the various calculations. To review the chapters briefly: Chapter 1 contains introductory comments. Chapters 2 and 2 are new to the third edition. Chapter 2 is a review of the prerequisite continuous control; Chapter 3 introduces the key effects of sampling in order to elucidate many of the topics that follow. Methods of linear analysis are presented in Chapters 4 through 6. Chapter 4 presents the z-transform. Chapter 5 introduces combined discrete and continuous systems, the sampling theorem, and the phenomenon of aliasing. Chapter 6 shows methods by which to generate discrete equations that will approximate continuous dynamics. The basic deterministic design methods are presented in Chapters 7 and 8 - the root-locus and frequency response methods in Chapter 7 and pole placement and estimators in Chapter 8. The state-space material assumes no previous acquaintance with the phase plane or state space, and the necessary analysis is developed from the ground up. Some familiarity with simultaneous linear equations and matrix notation is expected, and a few unusual or more advanced topics such as eigenvalues, eigenvectors, and the Cayley-Hamilton theorem are presented in Appendix C. Chapter 9 introduces optimal quadratic-loss control: First the control by state feedback is presents methods of analysis and design guidelines for the selection of the sampling period in a digital control system. It utilizes the design methods discussed in Chapters 7,8 and 9, in examples illustrating the effects of sample rate. Chapter 12 introduces both nonparametric and parametric identification. Nonparametric methods are based on spectral estimation. Parametric methods are introduced by starting with deterministic lease quares, indroducing random errors, and completing the solution with an algorithm for maximum likelihood. Sub-space methods are also introduced for estimating the state matrices directly. Nonlinear control is the subject of Chapter 13, including examples of plant nonlinearities and methods for the analysis and design of controllers for nonlinear models. Simulation, stability analysis, and performance enhancement by nonlinear controllers and by adaptive design are also included in Chapter 13. The chapter ends with a nonlinear design optimization alternative to the techniques presented in Chapter 9. The final chapter, 14, is a detailed design example of a digital servo for a disk drive head. Table P.1 shows the differences between teh second and third editions of the book.

For purposes of organization a course, Fig. P.1 shows the dependence of material in each chapter on previous chapters. By following the solid lines, the reader will have all the background required to understand the material in a particular chapter, even if the path omits some chapters. Furthermore, sections with a star (*) are optional and may be skipped with no loss of continuity. Chapters may also be skipped, as suggested by the dashed lines, if the reader is willing to take some details on faith; however, the basic ideas fo the later chapters will be understood along these paths.

The first seven chapters (skipping or quickly reviewing Chapter 2) constitute a comfortable one-quarter course that would follow a course in continuous linear control using a text such as Frankli, Powell, and Emami-Naeini (1994). For a one-semester course, the first eight chapters represent a comfortable load. The content of a second course has many possibilities. One possibility is to combine Chapters 8 and 9 with Chapter 10, 11, or 12. As can be seen from the figure, many options exist for including the material in the last five chapters. For a full year course, all fourteen chapters can be covered. One of the changes made in this third edition is that the optimal control material no longer depends on the least-squares development in the system identification chapter, thus allowing for more flexibiltiy in the sequence of teaching.

It has been found at Stanford that it is very useful to supplement the lecturers with laboratory work to enhance learning. A very satisfactory complement of laboratory equipment is a digital computer having an A/D and a D/A converter, an analog computer (or equivalent) with ten operational amplifiers, a digital storage scope, and a CAD package capable fo performing the basic computations and plotting graphs. A description of the laboratory equipment and experiments at Standord is described in Franklin and Powell, Control Systems Magazine(1989).

There are many important topics in crontrol that we have not been able to include in this book. There is, for example, no discussion of mu analysis or design, linear matrix inequalitits, or convex optimization. It is our expectation, however, that careful study of theis book will provide the sutdent engineer with a sound basis for design of sampled-data controls and a foundation for the study of these and many other advanced topics in this most exciting field.

As do all authors of technical works, we wish to acknowledge the vast array of contibutors on whose work our own presentaiton is based. The list of references gives some indication of theose to whom we are in debt. On a more personal level, we wish to express our appreciation to Profs. S. Boyd, A. Bryson, R. Cannon, S. Citron, J. How, and S. Rock for their valuable suggestions for the book and especially to our long-time colleague, Prof. Dan DeBra, for his careful reading and many spirited suggestions. We also wish to express our appreciation for many valuable suggestions to the current and former students of E207 and E208, for whom this book was written.

We also wish to express our appreciation to Laura Cheu, Emile Bauer, and all the staff at Addison-Wesley for their quality production of the book.

Michael L. Workman is Vice President of Development Server/Subsystem Products for IBM's Storage Products Company. He is responsible for the world-wide development, launch, and support of SSD Hard Disk Drives for Server Product Families as well as the development of Desktop and Mobile Product Families.