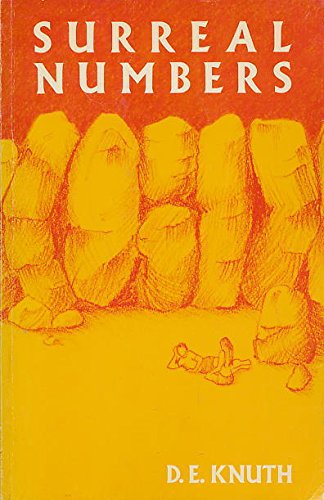 Nearly 30 years ago, John Horton Conway introduced a new way to construct numbers. Donald E. Knuth, in appreciation of this revolutionary system, took a week off from work on The Art of Computer Programming to write an introduction to Conway's method. Never content with the ordinary, Knuth wrote this introduction as a work of fiction--a novelette. If not a steamy romance, the book nonetheless shows how a young couple turned on to pure mathematics and found total happiness.

The book's primary aim, Knuth explains in a postscript, is not so much to teach Conway's theory as "to teach how one might go about developing such a theory." He continues: "Therefore, as the two characters in this book gradually explore and build up Conway's number system, I have recorded their false starts and frustrations as well as their good ideas. I wanted to give a reasonably faithful portrayal of the important principles, techniques, joys, passions, and philosophy of mathematics, so I wrote the story as I was actually doing the research myself."... It is an astonishing feat of legerdemain. An empty hat rests on a table made of a few axioms of standard set theory. Conway waves two simple rules in the air, then reaches into almost nothing and pulls out an infinitely rich tapestry of numbers that form a real and closed field. Every real number is surrounded by a host of new numbers that lie closer to it than any other "real" value does. The system is truly "surreal." quoted from Martin Gardner, Mathematical Magic Show, pp. 16--19

Surreal Numbers, now in its 13th printing, will appeal to anyone who might enjoy an engaging dialogue on abstract mathematical ideas, and who might wish to experience how new mathematics is created.

Donald E. Knuth is known throughout the world for his pioneering work on algorithms and programming techniques, for his invention of the Tex and Metafont systems for computer typesetting, and for his prolific and influential writing. Professor Emeritus of The Art of Computer Programming at Stanford University, he currently devotes full time to the completion of these fascicles and the seven volumes to which they belong.