Items related to The Inflationary Universe 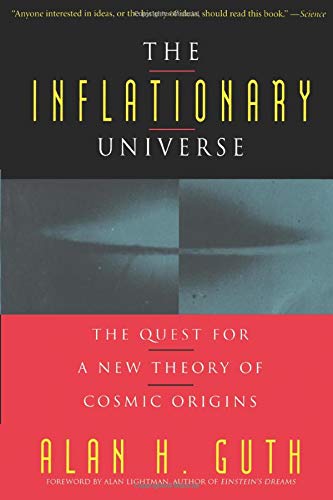 This is the compelling, first-hand account of Alan Guth's paradigm-breaking discovery of the origins of the universe and of his dramatic rise from young researcher to physics superstar. Guth's startling theory widely regarded as one of the most important contributions to science during the twentieth century states that the big bang was set into motion by a period of hyper-rapid inflation,” lasting only a billion-trillion-billionth of a second. The Inflationary Universe is the passionate story of one leading scientist's effort to look behind the cosmic veil and explain how the universe began.

Just about everyone in the scientific community accepts the theory that our universe began in a "big bang"--but that theory leaves numerous unanswered questions about why the cosmos formed in just the manner we observe today. In The Inflationary Universe, physicist Alan Guth recounts his and others' struggle to expound a theory that could plug the gaps. The outcome is a theory of "inflation" that postulates that the universe underwent an incomprehensibly large expansion in the first fraction of a microsecond of its existence. With the perspective that only a first-person account could provide, The Inflationary Universe sheds light on a leading theory in humankind's continuing quest to understand the universe we live in.

Alan Guth is V. F. Weisskopf Professor of Physics at the Massachusetts Institute of Technology. In addition to being elected to the National Academy of Sciences and receiving many other academic awards, Newsweek has called him one of The Top 25 American Innovators,” and Science Digest has ranked him among the 100 Brightest Scientists Under 40.”