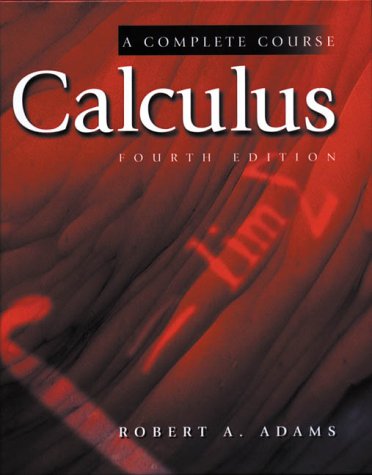 This classic text has been praised for its high level of mathematical integrity including complete and precise statements of theorems, use of geometric reasoning in applied problems and the diverse range of applications across the sciences. The Fourth Edition features a new open design and has been reorganized to place emphasis on key topics and to deliver an efficient teaching and learning tool for introductory calculus. *Reorganized for efficiency's sake and to place a greater emphasis on key topics *New open design to promote ease of learning for the student *Early introduction of transcendental functions *Emphasis on geometry, especially in applied problems *Precise statements of theorems *Diverse range of applications from all the sciences including physics, chemistry, engineering and social sciences

Robert Adams joined the Mathematics Department at the University of British Columbia in 1966 after completing a Ph.D. in Mathematics at the University of Toronto. His research interests in analysis led to the 1975 publication of a monograph, Sobolev Spaces, by Academic Press. It remained in print for 23 years. A second edition, joint with his colleague Professor John Fournier, was published in 2003. Professor Adams's teaching interests led to the 1982 publication of the first of his many calculus texts by Addison Wesley. These texts are now used worldwide. With a keen interest in computers, mathematical typesetting, and illustration. In 1984 Professor Adams became the first Canadian author to typeset his own textbooks using TeX on a personal computer. Since then he has also done all the illustrations for his books using the MG software program that he developed with his colleague, Professor Robert Israel. Now retired from UBC, Professor Adams is currently engaged in preparing the seventh editions of his textbooks and pursuing his interest in the Linux operating system. Dr. Christopher Essex. is Director, Program in Theoretical Physics, and Professor of Applied Mathematics, Department of Applied Mathematics at the University of Western Ontario.

Book Description Addison Wesley Publishing Company, 1999. Condition: Good. 4th Edition. Shows some signs of wear, and may have some markings on the inside. Seller Inventory # GRP2799626

Book Description Prentice Hall Canada, 1999. Condition: Poor. This is an ex-library book and may have the usual library/used-book markings inside.This book has hardback covers. In poor condition, suitable as a reading copy. No dust jacket. Backstrip torn; binding loose; Please note the Image in this listing is a stock photo and may not match the covers of the actual item,2200grams, ISBN:9780201396072. Seller Inventory # 7382166

Book Description Addison-Wesley, 1999. Condition: Good. A+ Customer service! Satisfaction Guaranteed! Book is in Used-Good condition. Pages and cover are clean and intact. Used items may not include supplementary materials such as CDs or access codes. May show signs of minor shelf wear and contain limited notes and highlighting. Seller Inventory # 0201396076-2-4

Book Description Hardback. Condition: Good. The book has been read but remains in clean condition. All pages are intact and the cover is intact. Some minor wear to the spine. Seller Inventory # GOR001917891

Book Description Hardback. Condition: Very Good. The book has been read, but is in excellent condition. Pages are intact and not marred by notes or highlighting. The spine remains undamaged. Seller Inventory # GOR003149982

Book Description Addison-Wesley. Condition: Good. Contains slight wear. Slight staining to edges. Ex-library, so some stamps and wear, and may have sticker on cover, but in good overall condition. Seller Inventory # Z1-C-009-01539

Shipping: US$ 13.28
From United Kingdom to U.S.A.
Destination, rates & speeds