Items related to Of Long Memory: Mississippi And The Murder Of Medgar...

Nossiter, Adam Of Long Memory: Mississippi And The Murder Of Medgar Evers

Of Long Memory: Mississippi And The Murder Of Medgar Evers 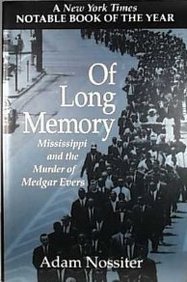 Recounts how Mississippi, once an outcast state, is confronting its past and dealing with issues of race and violence, through a revival of the case against Byron de la Beckwith, accused murderer of civil rights crusader Medgar Evers in 1963.

Adam Nossiter has been a staff writer for the New York Times and before that the Atlanta Journal-Constitution. He is the author of The Algeria Hotel: France, Memory, and the Second World War, and has been writing about the South for nearly 20 years. He lives in New Orleans.

The conviction earlier this year of Byron de la Beckwith for the 1963 murder of Medgar Evers provides a timeliness to this well- researched, fluidly written, and thoughtful book. A Jewish Yankee, Nossiter seems an unlikely chronicler of the lives of black civil rights Mississippian Evers; the racist murderer de la Beckwith; the original prosecutor of the murder, Bill Waller, who later became Mississippi's governor; Evers's mercurial, radical brother Charles; and Bobby DeLaughter, the prosecutor who finally obtained a conviction of de la Beckwith after two mistrials. Nossiter covered Mississippi in general and the case in particular for the Atlanta Journal-Constitution, and indeed, Nossiter and Mississippi are central characters in this book. In many ways, the assignment was akin to covering a foreign country. Like most foreigners, Nossiter had trouble at first learning the local language and byways. But, like most smart and persistent travelers, eventually he could claim some measure of understanding. In asking why the Evers case came to trial again, Nossiter found the answer not through looking at culture or economics but through a study of changing state government politics, which he views as ``a compelling mirror of larger movements beneath the surface.'' His Jewishness often plays a part in the story. For example, in July 1992 Nossiter finally had an opportunity to meet the imprisoned de la Beckwith, a man past 70 and in failing health. A friend, knowing de la Beckwith would never grant an interview to a Jew, presented Nossiter as a Catholic. But de la Beckwith was suspicious. ``Say the Hail Mary for me,'' he demanded of Nossiter, who admitted, ``Can't. Don't know it.'' Immediately, Nossiter writes, ``the look on Beckwith's face changed.'' Then he spoke: ``You're not a Catholic. You're a damn Jew.'' The book is filled with such dramatic, revelatory scenes, which prove Nossiter to be a perceptive, observant journalist. They are not likely to be forgotten soon by readers. -- Copyright ©1994, Kirkus Associates, LP. All rights reserved.

OF LONG MEMORY: MISSISSIPPI AND