Items related to Rocking the Cradle of Sexual Politics: What Happened...

Rocking the Cradle of Sexual Politics: What Happened When Women Said Incest 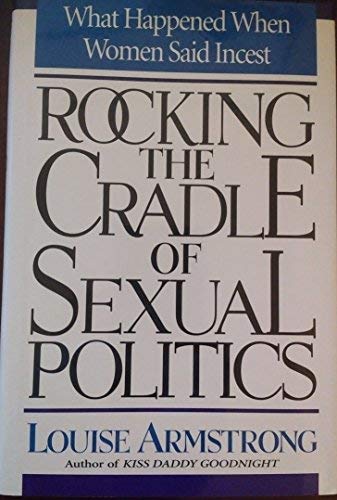 The author of Kiss Daddy Goodnight describes the explosive move from taboo and silence to backlash, discussing the controversy of the False Memory Syndrome and emphasizing the needs of today's children.

Armstrong, the self-professed "first walking, talking incest victim" of 1978, has written a stunning indictment of the entire victim/self-help/therapy movement. She explains how the intense media coverage of the whole gamut of abuse stories has trivialized the issue. Armstrong gives a detailed history, beginning back in the 1970s when incest was never mentioned, much less confronted, moving on to the impact of the made-for-television movie Something About Amelia, and concluding with the eventual reduction of the real abuse issue to mere grist for the talk show mill. Armstrong writes: "When did I first hear the knob click, advancing us from 'dread taboo' to 'decriminalization'... to 'medicalization'-in fact to industrialization? At my first convention, probably." While the writing is very personal and heavy with irony, Armstrong's work is also well referenced. Her book should become a staple of women's studies programs. In a time when U.S. News and World Report writes that Marion Barry "turned the infrastructure of therapy into a political tool" (September 26, 1994), Armstrong's work deserves dissemination in public libraries.
Nina Wikstrom Aguilar, Harris Computer Systems, Melbourne, Fla.
Copyright 1994 Reed Business Information, Inc.

Herself an incest survivor, Armstrong was one of the first to bring this previously invisible problem to national attention with her 1978 book, Kiss Daddy Goodnight. Here, she traces the history of public response to the "outing" of incest over the past 15 years. Asserting that incest is fundamentally a political issue-a result of deep-rooted social traditions of male privilege-and must be combatted as such, the author notes that it has instead been interpreted largely as a personal, intrafamilial problem. Thus, it has been treated primarily through therapy and counseling, which, she claims, are inadequate responses. She also describes the public's attempts to deny the pervasiveness of incest, citing, for instance, the recent buzz about the so-called false-memory syndrome, whose proponents argue that many "memories" of incest are actually planted in patients' heads by psychologists. She also details how many victims who seek legal recourse are stonewalled by the court system. Such responses, she asserts, both silence incest victims and further empower its perpetrators. Her harrowing accounts of how incest has been dealt with in the courtroom will enrage readers.
Copyright 1994 Reed Business Information, Inc.

1. ROCKING THE CRADLE OF SEXUAL POL

2. ROCKING THE CRADLE OF SEXUAL POL

3. Rocking the Cradle of Sexual Politics: What Happened When Women Said Incest