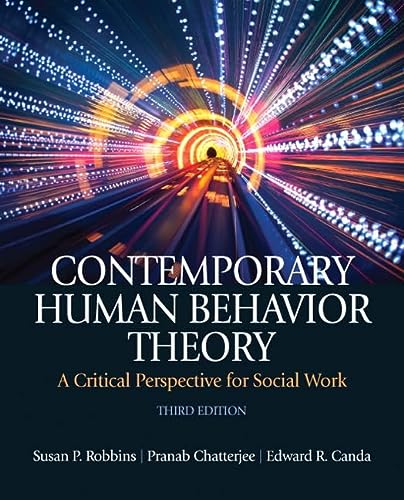 Contemporary Human Behavior Theory: A Critical Perspective for Social Work, 3e approaches HBSE from a comparative theory perspective, providing coverage of the most current and contemporary theories as well as traditional theories.

It includes contemporary developments in traditional lifespan theory, theories of political economy, and a separate chapter on transpersonal theory. Each chapter includes coverage of the research that supports a particular theory, an analysis of the validity of that research, and a discussion of updated “Contemporary Issues.”

Susan P. Robbins, Ph.D., LCSW is an Associate Professor at the University of Houston Graduate College of Social Work. She received her MSW from the University of Minnesota and her Ph.D. from Tulane University. She is the lead author of two monographs on drug abuse prevention and has published several book chapters on drugs and drug abuse. She has been a contributing author to the Encyclopedia of Social Work and the Social Workers' Desk Reference on the topics of cults, satanic ritual abuse and recovered memory of abuse and has published numerous articles in professional journals.

Pranab Chatterjee received his undergraduate education from Viswa-Bharati University in West Bengal, India.  Subsequent to that, he received a master’s degree in social work from The University of Tennessee, another master’s degree in sociology from The University of Chicago, and a Ph.D. in sociology from The University of Chicago.  He is currently Grace Longwell Coyle Professor Emeritus at Case Western Reserve University in Cleveland, Ohio.  Over the years, he has published many papers and books in social work and social welfare. His latest book is A Story of Ambivalent Modernization in Bangladesh and West Bengal (2010). Other recent books by him include Repackaging the Welfare State (1999), and Approaches to the Welfare State (1996).

Edward R. Canda, M.A., MSW, Ph.D., is a Professor in the School of Social Welfare at the University of Kansas. He has authored or co-authored 9 books and more than 100 articles, chapters, and other publications dealing with intersections of cultural diversity, spirituality, health, and disability in theory and practice. His most recent book is Spiritual Diversity in Social Work Practice, second edition (co-authored with Leola Dyrud Furman, Oxford University Press, 2010). Dr. Canda does extensive international research and teaching, especially in East Asia. He has a special interest in comparative cross-cultural studies of philosophies and theories of human behavior. Dr. Canda's website offers access to numerous related resources and links on these topics at www.socwel.ku.edu/canda.

Book Description soft cover. Condition: New. International Edition. No supplemental materials. International Editions may have a different cover or ISBN but generally have the exact same content as the US edition, just at a more affordable price. In some cases, end of chapter questions may vary slightly from the US edition. International Editions are typically printed in grayscale, and likely will not have any color throughout the book. New. Books ship from multiple locations depending on availability. All orders are shipped with tracking information. We take pride in our customer service. Please contact us if you have any questions regarding this listing. Seller Inventory # 12120