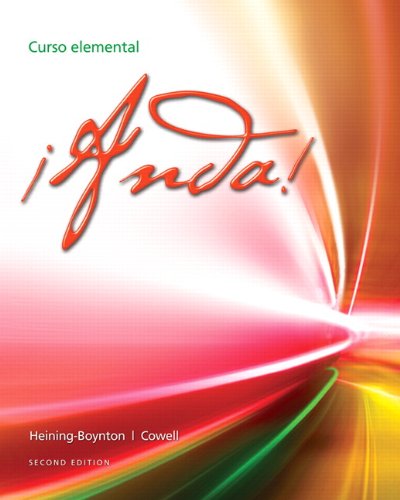 Note: This is a standalone book and does not include access card.

Access codes for Pearson's MyLab & Mastering products may not be included when purchasing or renting from companies other than Pearson; check with the seller before completing your purchase.

Access codes that are purchased from sellers other than Pearson carry a higher risk of being either the wrong ISBN or a previously redeemed code. Check with the seller prior to purchase.

Designed with You in Mind

Note: MyLanguageLabs does not come automatically packaged with this text. To purchase MyLanguageLabs access, please visit: www.mylanguagelabs.com or you can purchase a valuepack of the text + MyLanguageLabs 24-month access (ISBN: 0205872387).

Audrey Heining-Boynton received her Ph.D. from Michigan State University and her MA from The Ohio State University.  Her career spans K-12 through graduate school teaching, most recently as Professor of Education and Spanish at The University of North Carolina at Chapel Hill. She has won many teaching awards, including the prestigious ACTFL Anthony Papalia Award for Excellence in Teacher Education, the Foreign Language Association of North Carolina (FLANC) Teacher of the Year Award, and The UNC ACCESS Award for Excellence in Working with LD and ADHD students. Dr. Heining-Boynton is a frequent presenter at national and international conferences, has published more than one hundred articles, curricula, textbooks, and manuals, and has won nearly $4 million in grants to help create language programs in North and South Carolina. Dr. Heining-Boynton has also held many important positions: President of the American Council on the Teaching of Foreign Languages (ACTFL), President of the National Network for Early Language Learning, Vice President of Michigan Foreign Language Association, board member of the Foreign Language Association of North Carolina, committee chair for Foreign Language in the Elementary School for the American Association of Teachers of Spanish and Portuguese, and elected Executive Council member of ACTFL.  She is also an appointed two-term Foreign Language Annals Editorial Board member and guest editor of the publication.

Dr. Cowell has directed teacher workshops on Spanish language and cultures and has presented papers and written articles on the teaching of language and literature, the transition to blended and online courses in language teaching, and teaching across the curriculum. She is the co-author of two other college textbooks.