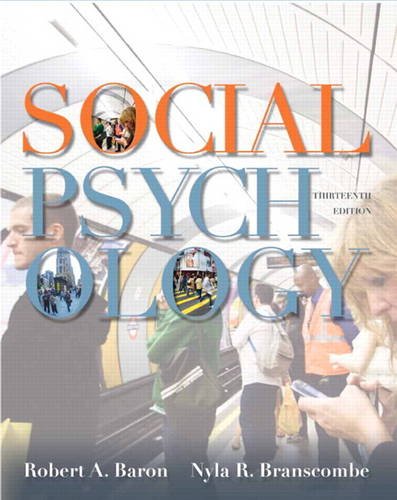 Show how the ever-changing field of Social Psychology is useful in students’ everyday lives.

The integration of application into the main body chapters helps students see the connection between theory and real world experiences.

This classic text retains the hallmark of its own past success: up-to-date coverage of the quickly evolving subject matter written in a lively manner that has been embraced by hundreds of thousands of students around the world. This book continues to balance its coverage of fundamentals with current research.

Sample chapter and more available on our preview site! www.pearsonhighered.com/fall2011preview/#Psych

Note: MyPsychLab does not come automatically packaged with this text. To purchase MyPsychLab, please visit: www.mypsychlab.com or you can purchase a valuepack of the text + MyPsychLab (at no additional cost). VP: 9780205246670

Robert A. Baron is the Spears Professor of Entrepreneurship at Oklahoma State University.  He received his PhD in social psychology from the University of Iowa (1968).  Prof. Baron has held faculty appointments at Rensselaer Polytechnic Institute, , Purdue, the Universities of Minnesota, Texas, South Carolina, Washington, Princeton University, and Oxford University.  From 1979-1981 he was the Program Director for Social and Developmental Psychology at NSF.  In 2001 he was appointed as a Visiting Senior Research Fellow by the French Ministry of Research (Universite de Toulouse & LIRHE).  Baron is a Fellow of APA and a Charter Fellow of APS. He has published more than 120 articles and 45 chapters, and is the author or co-author of 49 books in psychology and management. He serves on the boards of several major journals, and has received numerous awards for his research (e.g., “Thought Leader” award, Entrepreneurship Division, Academy of Management, 2009).  He holds three U.S. patents and was founder and CEO of IEP, Inc. (1993-2000).  His current research interests focus on applying the findings and principles of social psychology to the field of entrepreneurship, where he has studied such topics as the role of perception in opportunity recognition, how entrepreneurs’ social skills influence their success, and the role of positive affect in entrepreneurship.

Professor Branscombe has published more than 120 articles and chapters, has been co-recipient of the Otto Kleinberg prize for research on Intercultural and International Relations, and the 1996 and 2001 Society of Personality and Social Psychology Publication Award. She co-edited the 2004 volume “Collective Guilt: International Perspectives,” published by Cambridge University Press, the 2007 volume “Commemorating Brown: The Social Psychology of Racism and Discrimination,” published by the American Psychological Association, and the 2010 volume “Rediscovering Social Identity,” published by Psychology Press.

Professor Branscombe's current research focuses on two main issues: the psychology of historically privileged groups—when and why they may feel collective guilt, and the psychology of disadvantaged groups—particularly how they cope with discrimination. She gratefully acknowledges ongoing research support from the Canadian Institute for Advanced Research: Social Interactions, Identity and Well-Being Program.