Items related to Civilization in the West: 2

Civilization in the West: 2 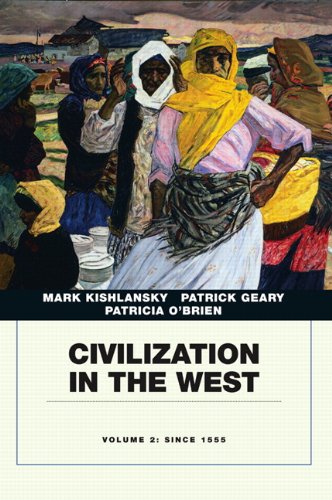 An incomparable narrative in a compact format at an affordable price, embellished with detailed maps and illustrations and intriguing captions, the Penguin Academic Civilizations in the West , Volume 2, 1/e, is the right choice for students today.

An incomparable narrative in a compact format at an affordable price, embellished with detailed maps and illustrations and intriguing captions, the Penguin Academic Civilizations in the West is the right choice for students today.

Mark Kishlansky is Frank B. Baird, Jr., Professor of English and European History and has served as the Associate Dean of the Faculty at Harvard University. He was educated at the State University of New York at Stony Brook, where he first studied history, and at Brown University, where he received his Ph.D. in 1977. For 16 years, he taught at the University of Chicago and was a member of the staff that taught Western Civilization. Currently, he lectures on the History of Western Civilization at Harvard. Professor Kishlansky is a specialist on seventeenth-century English political history and has written, among other works, A Monarchy Transformed, The Rise of the New Model Army, and Parliamentary Selection: Social and Political Choice in Early Modern England.  From 1984 to 1991, he was editor of the Journal of British Studies as well as from 2003-2009,  the general editor of History Compass, the first on-line history journal. He is also the general editor for Pearson Custom Publishing’s source and interpretations databases, which provide custom book supplements for Western Civilization courses.

Patrick Geary holds a Ph.D. in Medieval Studies from Yale University and has broad experience in interdisciplinary approaches to European history and civilization. He has served as the director of the Medieval Institute at the University of Notre Dame as well as director for the Center for Medieval and Renaissance Studies at the University of California, Los Angeles, where he is currently Distinguished Professor of History. He has also held positions at the University of Florida and Princeton University and has taught at the École des Hautes Études en Sciences Sociales in Paris, the Central European University in Budapest, and the University of Vienna. His many publications include Readings in Medieval History; Before France and Germany: The Creation and Transformation of the Merovingian World; Phantoms of Remembrance: Memory and Oblivion at the End of the First Millennium; The Myth of Nations: The Medieval Origins of Europe; and Women at the Beginning: Origin Myths from the Amazons to the Virgin Mary.

Patricia O’Brien is a specialist in modern French cultural and social history and received her Ph.D. from Columbia University. She has held appointments at Yale University, the University of California, Irvine, the University of California, Riverside, the École des Hautes Études en Sciences Sociales in Paris, and the University of California, Los Angeles. Between 1995 and 1999, Professor O’Brien worked to foster collaborative interdisciplinary research in the humanities as director of the University of California Humanities Research Institute. Since 2004, she has served as Executive Dean of the College of Letters and Science at UCLA. Professor O’Brien has published widely on the history of French crime and punishment, cultural theory, urban history, and gender issues. Representative publications include The Promise of Punishment: Prisons in Nineteenth-Century France; “The Kleptomania Diagnosis: Bourgeois Women and Theft in Late Nineteenth-Century France” in Expanding the Past: A Reader in Social History; and “Michel Foucault’s History of Culture” in The New Cultural History, edited by Lynn Hunt. Professor O’Brien’s commitment to this textbook grew out of her own teaching experiences in large, introductory Western civilization courses. She has benefited from the contributions of her students and fellow instructors in her approach to the study of Western civilization in the modern period.

2. CIVILIZATION IN THE WEST: 2

3. Civilization in the West: 2