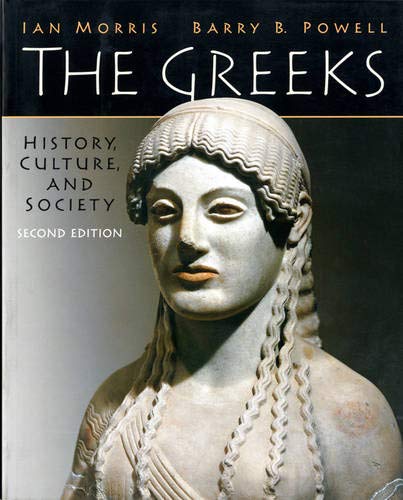 Organized chronologically, this text presents a complete picture of Greek civilization as a history and features sections on the art, architecture, literature, and thought of each period.

Ian Morris is the Jean and Rebecca Willard Professor of Classics and Professor of History at Stanford University, where he teaches large lecture courses on ancient empires and Greek history. He is either the author or the editor of nine books on ancient history and archaeology, and directs a major archaeological excavation in Sicily. His latest book, Why the West Rules ... For Now will appear in 2010. He has lectured at universities across America and Europe, and r appeared on television on the History Channel, Discovery Channel, and A&E Channel.

Barry B. Powell is the Halls-Bascom Professor of Classics Emeritus at the University of Wisconsin-Madison, where in his long career he was well known as a teacher of large lecture classes in ancient civilization and myth and for seminars on Homer. He has lectured in many countries and is the author of the bestselling Classical Myth (6th edition, 2008), widely used in college courses. He is best known as the author of Homer and the Origin of the Greek Alphabet (1991), which argues that the Greek alphabet was invented in order to record the poems of Homer. With Ian Morris he published the internationally admired A New Companion to Homer (1997). The 2nd edition of his popular introductory text Homer appeared in 2007, and he has written numerous other books, articles, screenplays, a novel, poetry, and a mock-epic The War at Troy: A True History (2006). He Recently, he appeared on the History Channel special Troy: The True Story (2005). His study Writing: Theory and History of the Technology of Civilization (2008) establishes a scientific terminology for studying the history of writing.