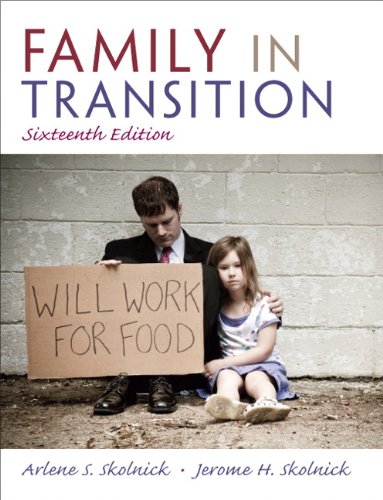 Appropriate for Marriage and Family and Sociology of Family courses.

Blending historical context with the latest scholarship, this reader examines the most current trends in the families and intimate relationships field of study.

Family in Transition 16e identifies the most current trends, places them in historical context, and balances cutting-edge scholarship with perennial favorites. The authors, who are leading scholars, build each new edition from classic literature in the field as well as the continuing stream of new family scholarship.

Arlene Skolnick, Ph.D., is a Visiting Scholar at the sociology department at New York University, and a consultant to the Families and Work Institute.  For many years she was a member of the research staff at the Institute of Human Development, at the University of California, Berkeley, where she worked on the Berkeley Longitudinal Studies, examining the emotional lives and marriages of study members as they evolved from childhood to middle age. More recently, Professor Skolnick has been studying the sources and impact of job stress on the families of police officers.  She has also taken part in several interdisciplinary projects dealing with social science, law and family policy.  In recent years, she helped to organize a monthly Family Policy Seminar at Berkeley, and co-edited the book that grew out of the seminar: All Our Families: New Policies for a New Century.  Professor Skolnick has published a number of other books and articles on marriage and the family, including Family in Transition and Embattled Paradise: The American Family in an Age of Uncertainty. She is currently at work on a book entitled The Unfinished Family: The Future of Love and Work.

Jerome Skolnick, a sociologist, currently teaches at the New York University School of Law where he is Co-Director of the Center for Research in Crime and Justice. He is also Claire Clements Dean’s Professor emeritus at the University of California, Berkeley, where he was Chair of the Center for the Study of Law and Society. He has written many books and articles and has received numerous grants, honors and awards in recognition of his research and scholarship. These include the August Vollmer award of the American Society of Criminology; awards for distinguished scholarship from the Academy of Criminal Justice Sciences and the Western Society of Criminology; the Mills award of the Society for the Study of Social Problems (for Justice Without Trial); election to the honorary Sociological Research Association; and a Guggenheim Foundation fellowship. He was Director of the Task Force on Violent Protest and Confrontation of the  National Commission on the Causes and Prevention of Violence, Washington, D.C. 1968-1969 and served as President of the American Society of Criminology from November 1993 through November 1994. In 1997, he completed a three year term as Chair of the National Academy of Science/ National Research Council's Committee on Law and Justice. In 1996 he was honored by John Jay College of Criminal Justice as their Criminal Justice Educator of the Year.