Items related to The Psychologist as Detective: An Introduction to Conducting...

Smith, Randolph A.; Davis, Stephen F The Psychologist as Detective: An Introduction to Conducting Research in Psychology (6th Edition)

The Psychologist as Detective: An Introduction to Conducting Research in Psychology (6th Edition) 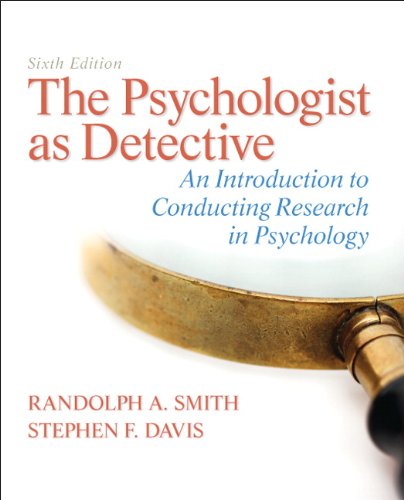 Understanding psychological research by finding a problem, discovering the clues, and evaluating the evidence.

The Psychologist as Detectives introduces students to the research process. The authors treat psychological research as a detective case in which a problem is presented, clues are discovered, evidence is evaluated, and a report is prepared for consideration by peers.

Randolph A. (Randy) Smith is Professor and Chair of Psychology at Lamar University. Randy completed his undergraduate degree at the University of Houston and PhD at Texas Tech University in experimental psychology (specialties in human learning/memory and statistics). Randy taught at Ouachita Baptist University in Arkansas for 26 years, chaired Kennesaw State University’s Psychology Department for four years, and became Chair of Lamar University’s Psychology Department in 2007. His professional work centers on the scholarship of teaching and learning. Randy served for 12 years as Editor of the Society for the Teaching of Psychology’s journal Teaching of Psychology and subsequently served as Editor of the Psi Chi Journal of Undergraduate Research.

He has written several book chapters and articles and made numerous presentations dealing with varied aspects of teaching, applying social psychology to teaching, and assessment of teaching. He has worked with high school teachers grading AP exams since the test’s inception and has served as Faculty Advisor for TOPSS (Teachers of Psychology in Secondary Schools).  He is a member of the American Psychological Association (a Fellow of Divisions 1 and 2—General Psychology and Teaching) and a Fellow of the Association for Psychological Science. In 2006, Randy received the American Psychological Foundation’s Charles L. Brewer Distinguished Teaching of Psychology Award and the University System of Georgia Regents’ Scholarship of Teaching and Learning Award.

Stephen F. Davis is Roe R. Cross Distinguished Professor Emeritus of Psychology at Emporia State University in Emporia, Kansas. Currently he is Visiting Distinguished Professor of Psychology at Texas Wesleyan University and Distinguished Guest Professor at Morningside College. In 2002–2003 he was the Knapp Distinguished Professor of Arts and Sciences at the University of San Diego. He received his bachelor’s and master’s degrees in psychology from Southern Methodist University and his PhD in experimental psychology from Texas Christian University. In 2007 he was awarded the honorary Doctor of Humane Letters degree by Morningside College. His research, which always includes student assistants, has investigated such diverse topics as academic dishonesty, learning versus grade orientation of students, Type A personality, the Impostor Phenomenon, and the behavioral effects of ingesting toxic metals. He is the author of more than 300 journal articles, 31 books, and more than 900 convention presentations.

“The writing style of the book is great. It is definitely non intimidating for students. The authors do a great job in the clarity and readability of the material.”

“It makes research design and statistics approachable and students are able to grasp the material well.”

“The writing style is enjoyable. The writers write like they are talking to a student. It is approachable and easy to understand. I have not seen this in other experimental psychology textbooks.”

“I love the writing style of this text. The subject level, the clarity of the arguments, the readability and interest is very appropriate the new investigators that this class prepares. The chapter organization presents a natural flow and development of the subject matter based on progression and relevance,”

1. The Psychologist as Detective: An Introduction to Conducting Research in Psychology (6th International Edition)

Book Description Pearson, 2012. Soft cover. Condition: New. 5th or later Edition. Brand New International Edition textbook. Some book may show sales disclaimer such as "Not for Sale or Restricted in US" on the cover page but it is absolutely legal to use in US or Canada. Ship from Multiple Locations, including Asia , Hong Kong ,Taiwan , US or Canada depend on stock location. Seller Inventory # 000240

2. The Psychologist as Detective 6e

Book Description Paperback. Condition: New. This is printed on High-Quality acid free paper "Brand New International Edition" Textbook which has different ISBN and Cover design than US Edition but same contents as the US edition. Some book may show sales disclaimer such as "Not for Sale or Restricted in US" on the cover page but it is absolutely legal to use. ** Not low quality India edition.** CD/DVD or access codes may not be included. Seller Inventory # GB201900998

3. The Psychologist as Detective: An Introduction to Conducting Research in Psychology (6th Edition)