Items related to Government in America: People, Politics, and Policy,... 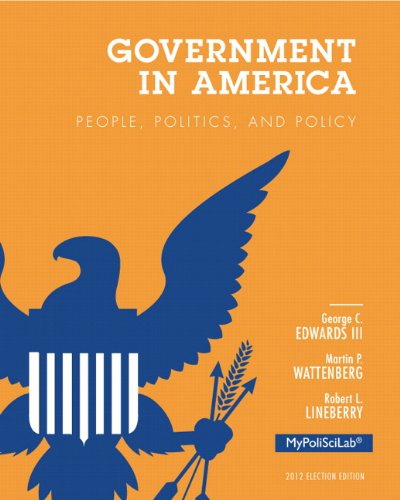 This text features full integration with the New MyPoliSciLab.  MyPoliSciLab includes a wide array of resources to encourage students to look at American politics like a political scientist and analyze current political issues.  Political Explorer lets students play the role of a political scientist by investigating issues through interactive data.  Core Concept videos discuss the big ideas in each chapter and apply them to key political issues. Simulations allow students to experience how political leaders make decisions.

A better teaching and learning experience

This program provides a better teaching and learning experience–for you and your students. Here’s how:

George C. Edwards III is University Distinguished Professor of Political Science at Texas A&M University and the Jordan Chair in Presidential Studies. He is also the Winant Professor of American Government at the University of Oxford. When he determined that he was unlikely to become shortstop for the New York Yankees, he turned to political science. Today, he is one of the country’s leading scholars of the presidency and has written or edited 25 books on American politics.

Martin P. Wattenberg teaches courses on American politics at the University of California, Irvine. His first regular paying job was with the Washington Redskins, from which he moved on to receive a Ph.D. at the University of Michigan. He is the author of Is Voting for Young People?, which examines the role of young people in elections today. His research also encompasses how  elections in the United States compare to those in other established democracies.

Robert L. Lineberry is a professor of political science at the University of Houston. Bob has been president of the Policy Studies Section of the American Political Science Association and is the author or coauthor of numerous books and articles on political science. In addition, he has regularly taught the introductory course in American government for the past 40 years.

“Government in America is a tour de force. Attention to detail, good historical coverage, and up-to-date developments in American politics make the book attractive and relevant to students. Visually, the book is rich, and the pedagogical tools are useful. One excellent feature of each chapter is the conclusion, which relates the chapter to the themes of democracy and the scope of government.”—Jeneen Hobby, Cleveland State University