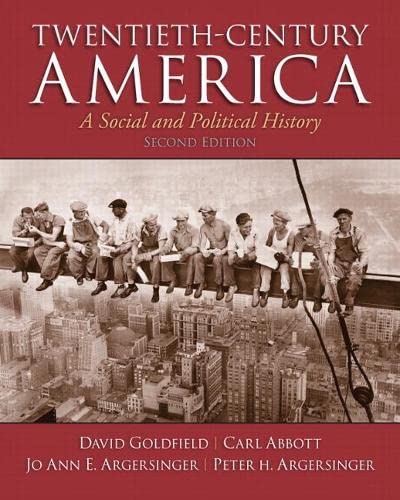 A compelling story of 20th century events and people, including those familiar and unfamiliar to students.

The goal of this book is to emphasize what students need to know about America’s past to function best in the society that emerged from the 20th century. The authors accomplish this by using a strong, clear narrative as well as integrating political and social history.

Twentieth Century America fits the experiences of particular groups into the broader perspective of the American past while giving voice to minor and major players alike. The text is organized chronologically, so students can understand the sequence of events in history.

Upon completing this book readers will be able to:

David Goldfield received his Ph.D. in history from the University of Maryland. Since 1982 he has been Robert Lee Bailey Professor of History at the University of North Carolina in Charlotte. He is the author or editor of thirteen books on various aspects of southern and urban history. Two of his works–Cotton Fields and Skyscrapers: Southern City and Region, 1607-1980 (1982) and Black, White, and Southern: Race Relations and Southern Culture, 1940 to the Present (1990)–received the Mayflower Award for nonfiction and was nominated for the Pulitzer Prize in history. His most recent book is Still Fighting the Civil War: The American South and Southern History (2002). When he is not writing history, Dr. Goldfield applies his historical craft to history museum exhibits, voting rights cases, and local planning and policy issues.

Carl Abbott is a professor of Urban Studies and planning at Portland State University. He taught previously in the history departments at the University of Denver and Old Dominion University, and held visiting appointments at Mesa College in Colorado and George Washington University. He holds degrees in history from Swarthmore College and the University of Chicago. He specializes in the history of cities and the American West and serves as co-editor of the Pacific Historical Review. His books include The New Urban America: Growth and Politics in Sunbelt Cities (1981, 1987), The Metropolitan Frontier: Cities in the Modern American West (1993), Planning a New West: The Columbia River Gorge National Scenic Area (1997), and Political Terrain: Washington, D.C. from Tidewater Town to Global Metropolis (1999). He is currently working on a comprehensive history of the role of urbanization and urban culture in the history of western North America.

Jo Ann E. Argersinger received her Ph.D. from George Washington University and is Professor of History at Southern Illinois University. A recipient of fellowships from the Rockefeller Foundation and the National Endowment for the Humanities, she is a historian of social, labor, and business policy. Her publications include Toward a New Deal in Baltimore: People and Government in the Great Depression (1988) and Making the Amalgamated: Gender, Ethnicity, and Class in the Baltimore Clothing Industry (1999).

Peter H. Argersinger received his Ph.D. from the University of Wisconsin and is Professor of History at Southern Illinois University. He has won several fellowships as well as the Binkley-Stephenson Award from the Organization of American Historians. Among his books on American political and rural history are Populism and Politics (1974), Structure, Process, and Party (1992), and The Limits of Agrarian Radicalism (1995). His current research focuses on the political crisis of the 1890s.