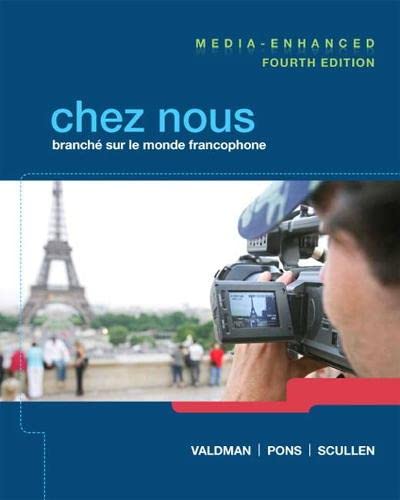 Note: If you are purchasing the standalone text or electronic version, MyFrenchLab does not come automatically packaged with the text. To purchase MyFrenchLab, please visit: www.mylanguagelabs.com or you can purchase a package of the physical text + MyFrenchLab by searching for ISBN 10: 0205949452  / ISBN 13: 9780205949458.  MyFrenchLab is not a self-paced technology and should only be purchased when required by an instructor.

The Media-Enhanced Version of the Fourth Edition amplifies Chez nous’ innovative treatment of grammar and focus on skills development with the addition of two exciting NEW videos and assignable online text activities in MyFrenchLab.

This program will provide a better teaching and learning experience — for you and your students. Here’s how:

From the Back Cover: About the Author:

Albert Valdman earned a B.A. in Romance languages at the University of Pennsylvnia and a   Ph.D. in French linguistics from Cornell University. He started his career at the Foreign Service Institute of the U.S. Department of State and at the Pennsylvania State University before joining Indiana University, where  he is Rudy Professor of French/Italian and Linguistics emeritus, director of the Creole Institute and editor of Studies in Second Language Acquisition. At Indiana University, he directed the program of elementary and intermediate French, including the mentoring of graduate student instructors and coordinators. A constant in his career has been his interest in developing more effective approaches to the teaching of foreign languages, the training of teachers, and the preparation of pedagogical materials. Valdman held the posts of president of the AATF and of the International Association of Applied Linguistics. For his commitment to the teaching of French language and culture and his pioneering work in the description of French in the United States, he was named Commandeur dans l’Ordre des Palmes Académiques of France, member of l’Ordre des Francophones d’Amérique of the government of Quebec province, and awarded the Médaille d’Or du  mérite francophone by Renaissance française.  His work in Haitian Studies and creole linguistics was recognized by Life Time Achievement Awards from the Haitian Studies Association and the Society for Pidgin and Creole Linguistics.

Cathy Pons completed a B.A. in French at the University of North Carolina at Greensboro, she spent a year in France as a Fulbright Teaching Assistant. Pons completed her doctorate in French linguistics at Indiana University where, as an Assistant Professor, she directed the elementary French program and the MA in French instruction. Teaching at the University of North Carolina at Asheville since 1995, Pons is Professor in the Department of Foreign Languages. In addition to teaching courses in French language, culture, and linguistics, Pons teaches K-12 methods courses for licensure candidates in Chinese, French, German, Latin, and Spanish. She is past president of the Foreign Language Association of North Carolina and has received numerous grants in support of study abroad programs for students and faculty. With more than thirty years’ experience in elementary French teaching and teacher preparation, Pons finds the classroom to be a stimulating environment.

Mary Ellen Scullen  completed her B.A. in French at Kalamazoo College in Michigan, she went to Tours, France to be a French government sponsored teaching assistant for one year. Three years later, Scullen returned to the U.S. with a Licence de Lettres modernes, mention Français Langue Étrangère and a Maîtrise de Français Langue Étrangère from Université François Rabelais in Tours. Scullen earned a joint Ph.D. in French Linguistics and Theoretical Linguistics from Indiana University in 1993. Scullen has taught French language, culture, and linguistics, coordinated the basic French language program, and supervised teaching assistants at the University of Louisville and, since 1998, at the University of Maryland, College Park. She also had the opportunity to teach French in southern Africa at the University of Malawi from 1995—1997 and to serve as the Resident Director for the Maryland-in-Nice program in Nice, France from 2002—2003. In 2005, she was named Chevalier dans l’Ordre des Palmes académiques of France. For the past several years, Scullen has been involved in training new teaching assistants not only in French, but also in Spanish, German, Hebrew, Chinese, Russian, and Japanese. She finds working with new teaching assistants to be highly rewardingand she truly loves being in the classroom with first year students.