Items related to Development Through the Lifespan (6th Edition) (Berk,... 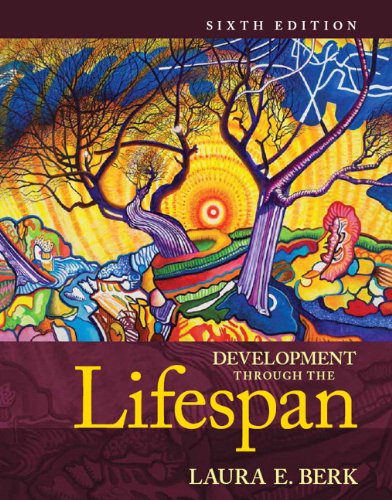 Laura Berk’s Development Through the Lifespan is relied upon in classrooms worldwide for its clear, engaging writing style, exceptional multicultural and cross-cultural focus, cutting-edge consideration of the interrelationships between heredity and environment, rich examples, and long-standing commitment to presenting the most up-to-date scholarship. This new edition continues to offer students research-based practical applications that they can relate to their personal and professional lives.

Laura Berk, renowned professor and researcher, has revised the text with new pedagogy, a heightened emphasis on the interplay between heredity and environment, and an enhanced focus on many social policy issues, while emphasizing the lifespan perspective throughout. The latest theories and findings in the field are made accessible to students in a manageable and relevant way. Berk’s signature storytelling style invites students to actively learn beside the text’s “characters.” Students are provided with an especially clear and coherent understanding of the sequence and underlying processes of human development, emphasizing the interrelatedness of all domains—physical, cognitive, emotional, social—throughout the text narrative and in special features.

Berk also helps students connect their learning to their personal and professional areas of interest.  Her voice comes through when speaking directly about issues students will face in their future pursuits as parents, educators, health care providers, social workers, and researchers.  As members of a global and diverse human community, students are called to intelligently approach the responsibility of understanding and responding to the needs and concerns of both young and old.

While carefully considering the complexities of human development, Berk presents classic and emerging theories in an especially clear, engaging writing style, with a multitude of research-based, real-world, cross-cultural, and multicultural examples. Strengthening the connections among developmental domains and of theory and research with applications, this edition's extensive revision brings forth the most recent scholarship, representing the changing field of human development.

NOTE: This is the standalone book, if you want the book/access code package order the ISBN below.

Berk has published widely on the effects of school environments on children’s development, the development of private speech, and the role of make-believe play in development. Her research has been funded by the U.S. Office of Education and the National Institute of Child Health and Human Development. It has appeared in many prominent journals, including Child Development, Developmental Psychology, Merrill-Palmer Quarterly, Journal of Abnormal Child Psychology, Development and Psychopathology, and Early Childhood Research Quarterly. Her empirical studies have attracted the attention of the general public, leading to contributions to Psychology Today and Scientific American. She has also been featured on National Public Radio’s Morning Edition and in Parents Magazine, Wondertime, and Reader’s Digest.

Berk has served as a research editor for Young Children and a consulting editor for Early Childhood Research Quarterly. Currently, she is an associate editor for the Journal of Cognitive Education and Psychology. She is a frequent contributor to edited volumes on early childhood development, having recently authored chapters on the importance of parenting, on make-believe play and self-regulation, and on the kindergarten child. She has also written the article on social development for The Child: An Encyclopedic Companion; the article on Vygotsky for the Encyclopedia of Cognitive Science; and the chapter on storytelling as a teaching strategy for Voices of Experience: Memorable Talks from the National Institute on the Teaching of Psychology (Association for Psychological Science). She is the coauthor of the forthcoming chapter on make-believe play and self-regulation in the Sage Handbook of Play in Early Childhood.

Berk’s books include Private Speech: From Social Interaction to Self-Regulation; Scaffolding Children’s Learning: Vygotsky and Early Childhood Education; Landscapes of Development: An Anthology of Readings; and A Mandate for Playful Learning in Preschool: Presenting the Evidence. In addition to Exploring Lifespan Development, she is author of the best-selling texts Child Development and Infants, Children, and Adolescents, and Development Through the Lifespan published by Pearson. Her book for parents and teachers is Awakening Children’s Minds: How Parents and Teachers Can Make a Difference.

Berk is active in work for children’s causes. In addition to service in her home community, she is a member of the national board of directors and chair of the Chicago advisory board of Jumpstart, a nonprofit organization that provides intensive literacy intervention to thousands of low-income preschoolers across the United States, using college and university students as interveners. Berk is a fellow of the American Psychological Association, Division 7: Developmental Psychology.

What Reviewers Are Saying

Again, you have written one of the best textbooks I have ever reviewed.  You do a great job of using research-based material, provide clear statements describing complicated issues, provide useful summaries, and write in a way that enhances student interest and learning.  In fact, I would suggest that faculty using your text end up learning even more than the students who read the book.

The writing style is extremely fluid, easy to read, and engaging.

Diversity and multicultural coverage is a REAL strength of the text.

The research is absolutely current, relevant, and well-integrated throughout the text.

I think students need stories to serve as frameworks for thinking about developmental concepts, and this text provides that.

Laura Berk has included more diversity content (in both regular text and various boxes) than in any other comparable text. Bravo for Berk.