Items related to Psychology: From Inquiry to Understanding -- Books... 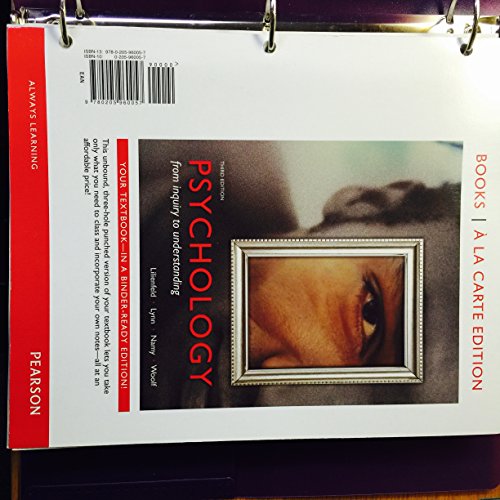 Provides the framework to go from inquiry to understanding.

Psychology: From Inquiry to Understanding, 3/e, teaches students how to test their assumptions, and motivates them to use scientific thinking skills to better understand the field of psychology in their everyday lives. By applying scientific thinking, students can more intelligently evaluate claims about both laboratory research and daily life. In the end, students will emerge with the “psychological smarts,” or open-minded skepticism, needed to distinguish psychological misinformation from credible, useful psychological information.

MyPsychLab is an integral part of the Lilienfeld program. Engaging online activities and assessments provide a teaching and learning system that helps students become scientific thinkers. With MyPsychLab, students can watch videos on psychological research and applications, participate in virtual classic experiments, and develop critical thinking skills through writing.

This title is available in a variety of formats — digital and print. Pearson offers its titles on the devices students love through Pearson’s MyLab products, CourseSmart, Amazon, and more.

This Book a la Carte Edition is an unbound, three-hole punched, loose-leaf version of the textbook and provides students the opportunity to personalized their book by incorporating their own notes and taking the portion of the book they need to class – all at a fraction of the bound book price.

SCOTT O. LILIENFELD received his B.A. in Psychology from Cornell University in 1982 and his Ph.D. in Clinical Psychology from the University of Minnesota in 1990. He completed his clinical internship at Western Psychiatric Institute and Clinic in Pittsburgh, Pennsylvania, from 1986 to 1987. He was Assistant Professor in the Department of Psychology at SUNY Albany from 1990 to 1994 and now is Professor of Psychology at Emory University. He is a Fellow of the Association of Psychological Science and was the recipient of the 1998 David Shakow Award from Division 12 (Clinical Psychology) of the American Psychological Association for Early Career Contributions to Clinical Psychology. Dr. Lilienfeld is a past president of the Society for a Science of Clinical Psychology within Division 12. He is the founder and editor of the Scientific Review of Mental Health Practice, Associate Editor of Applied and Preventive Psychology, and a regular columnist for Scientific American Mind magazine. He has authored or coauthored seven books and over 200 journal articles and chapters. Dr. Lilienfeld has also been a participant in Emory University’s “Great Teachers” lecturer series, as well as the Distinguished Speaker for the Psi Chi Honor Society at the American Psychological Association and numerous other national conventions.

STEVEN JAY LYNN received his B.A. in Psychology from the University of Michigan and his Ph.D. in Clinical Psychology from Indiana University. He completed an NIMH Postdoctoral Fellowship at Lafayette Clinic, Detroit, Michigan, in 1976 and is now Professor of Psychology at Binghamton University (SUNY), where he is the director of the Psychological Clinic. Dr. Lynn is a fellow of numerous professional organizations, including the American Psychological Association and the American Psychological Society, and he was the recipient of the Chancellor’s Award of the State University of New York for Scholarship and Creative Activities. Dr. Lynn has authored or edited 19 books and more than 260 other publications, and was  recently named on a list of “Top Producers of Scholarly Publications in Clinical Psychology Ph.D. Programs” (2000-2004/Stewart, Wu, & Roberts, 2007, Journal of Clinical Psychology). Dr. Lynn has served as the editor of a book series for the American Psychological Association, and he has served on 11 editorial boards, including the Journal of Abnormal Psychology. Dr. Lynn’s research has been supported by the National Institute of Mental Health and the Ohio Department of Mental Health.

LAURA L. NAMY received her B.A. in Philosophy and Psychology from Indiana University in 1993 and her doctorate in Cognitive Psychology at Northwestern University in 1998. She is now Associate Professor of Psychology and Core Faculty in Linguistics at Emory University. Dr. Namy is the editor of the Journal of Cognition and Development. At Emory, she is Director of the Emory Child Study Center and Associate Director of the Center for Mind, Brain, and Culture. Her research focuses on the origins and development of verbal and nonverbal symbol use in young children, sound symbolism in natural language, and the role of comparison in conceptual development.

NANCY J. WOOLF received her B.S. in Psychobiology at UCLA in 1978 and her Ph.D. in Neuroscience at UCLA School of Medicine in 1983. She is Adjunct Professor in the Department of Psychology at UCLA. Her specialization is behavioral neuroscience, and her research spans the organization of acetylcholine systems, neural plasticity, memory, neural degeneration, Alzheimer’s disease, and consciousness. In 1990 she won the Colby Prize from the Sigma Kappa Foundation, awarded for her achievements in scientific research in Alzheimer disease. In 2002 she received the Academic Advancement Program Faculty Recognition Award. She also received a Distinguished Teaching Award from the Psychology Department at UCLA in 2008. Dr. Woolf is currently on the editorial boards of Science and Consciousness Review  and  Journal of Nanoneuroscience.