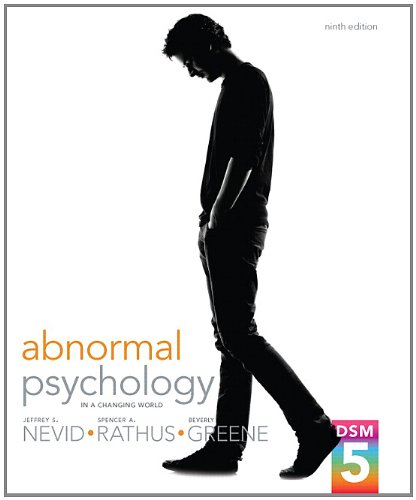 Puts a human face on the study of Abnormal Psychology, now with DSM-5 coverage throughout.

Abnormal Psychology in a Changing World, 9/e uses first-person narratives from people struggling with psychological disorders as a pedagogical framework. Updated to reflect the revision of the Diagnostic and Statistical Manual (DSM-5), the authors endeavor to bring research developments and advancements in abnormal psychology to students. Through illustrative case examples drawn from the authors' own experiences, they recognize there is a human dimension to the study of abnormal psychology.

The 9th edition includes coverage of the Diagnostic and Statistical Manual (DSM-5), with updated text references and examples throughout.

Spencer A. Rathus received his PhD from the University at Albany. He is on the faculty at The College of New Jersey. His areas of interest include psychological assessment, cognitive behavior therapy, and deviant behavior. He is the originator of the Rathus Assertiveness Schedule, which has become a Citation Classic. He has authored several books, including Psychology: Concepts and Connections, Essentials of Psychology, Childhood and Adolescence: Voyages in Development, PSYCH, HDEV, and CDEV. He co-authored Making the Most of College with Lois Fichner-Rathus; AIDS: What Every Student Needs To Know with Susan Boughn; Behavior Therapy, Psychology and the Challenges of Life, Your Health, and Health in the New Millennium with Jeffrey S. Nevid; and Human Sexuality in a World of Diversity with Jeffrey S. Nevid and Lois Fichner-Rathus. His professional activities include service on the American Psychological Association Task Force on Diversity Issues at the Precollege and Undergraduate Levels of Education in Psychology, and on the Advisory Panel, American Psychological Association, Board of Educational Affairs (BEA) Task Force on Undergraduate Psychology Major Competencies.

Beverly A. Greene is Professor of Psychology at St. John’s University and is a Fellow of seven divisions of the American Psychological Association, as well as a Fellow of the American Orthopsychiatric Association and the Academy of Clinical Psychology.  She holds a Diplomate in Clinical Psychology and serves on the editorial boards of numerous scholarly journals. She received her Ph.D. in Clinical Psychology from Adelphi University and worked in public mental health for over a decade. She was founding coeditor of the APA Society for the Study of Lesbian, Gay, and Bisexual Issues series, Psychological Perspectives on Lesbian, Gay and Bisexual Issues. She is also coauthor of the recent book, What Therapists Don’t Talk About and Why: Understanding Taboos That Hurt Ourselves and Our Clients, and has more than 80 professional publications that are the subject of nine national awards. Dr. Greene was recipient of the APA 2003 Committee on Women in Psychology Distinguished Leadership Award; 1996 Outstanding Achievement Award from the APA Committee on Lesbian, Gay, and Bisexual Concerns; the 2004 Distinguished Career Contributions to Ethnic Minority Research Award from the APA Society for the Study of Ethnic Minority Issues; the 2000 Heritage Award from the APA Society for the Psychology of Women; the 2004 Award for Distinguished Senior Career Contributions to Ethnic Minority Research (APA Division 45); and the 2005 Stanley Sue Award for Distinguished Professional Contributions to Diversity in Clinical Psychology (APA Division 12). Her coedited book, Psychotherapy with African American Women: Innovations in Psychodynamic Perspectives and Practice, was also honored with the Association for Women in Psychology’s 2001 Distinguished Publication Award. In 2006, she was the recipient of the Janet Helms Award for Scholarship and Mentoring from the Teacher’s College, Columbia University Cross Cultural Roundtable, and of the 2006 Florence Halpern Award for Distinguished Professional Contributions to Clinical Psychology (APA Division 12).  In 2009, she was honored as recipient of the APA Award for Distinguished Senior Career Contribution to Psychology in the Public Interest. She is an elected representative to the APA Council and member at large of the Women’s and Public Interest Caucuses of the Council.

2. Abnormal Psychology in a Changing World