Items related to The Time Traveller's Guide to Medieval England:...

Ian Mortimer The Time Traveller's Guide to Medieval England: A Handbook for Visitors to the Fourteenth Century

The Time Traveller's Guide to Medieval England: A Handbook for Visitors to the Fourteenth Century 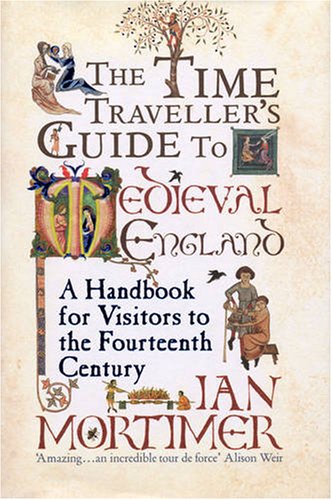 A time machine has just transported you back to the fourteenth century. What do you see? How do you dress? How do you earn a living and how much are you paid? What sort of food will you be offered by a peasant or a monk or a lord? An more important, where will you stay?...

Ian Mortimer is a Fellow of the Royal Historical Society and was awarded the Alexander Prize in 2004 for his work on the social history of medicine. He holds a Ph.D. in history and a higher doctorate from the University of Exeter. He has penned five other medieval books, most recently the revolutionary study Medieval Intrigue: Decoding Royal Conspiracies. He has also worked for several archive and historical research organizations in the UK, where he lives with his wife and children. Visit Ian at IanMortimer.com.

What does the word "medieval" conjure up in your mind? Knights and castles? Monks and abbeys? Huge tracts of forest in which outlaws live in defiance of the law? Such images may be popular but they say little about what life was like for the majority. Imagine you could travel in time; what would you find if you went back to the fourteenth century? Imagine yourself in a dusty London street on a summer morning. A servant opens an upstairs shutter and starts beating a blanket. A dog guarding a traveler's packhorses starts barking. Nearby traders call out from their market stalls while two women stand chatting, one shielding her eyes from the sun, the other with a basket in her arms. The wooden beams of houses project out over the street. Painted signs above the doors show what is on sale in the shops beneath. Suddenly a thief grabs a merchant's purse near the traders' stalls, and the merchant runs after him, shouting. Everyone turns to watch. And you, in the middle of all this, where are you going to stay tonight? What are you wearing? What are you going to eat?

As soon as you start to think of the past happening (as opposed to it having happened), a new way of conceiving history becomes possible. The very idea of traveling to the Middle Ages allows us to consider the past in greater breadth -- to discover more about the problems which the English have had to face, the delights they found in life, and what they themselves were like. As with a historical biography, a travel book about a past age allows us to see its inhabitants in a sympathetic way: not as a series of graphs showing fluctuations in grain yields or household income but as an investigation into the sensations of being alive in a different time. You can start to gain an inkling as to why people did this or that, and even why they believed things which we find simply incredible. You can gain this insight because you know that these people are human, like you, and that some of these reactions are simply natural. The idea of traveling to the Middle Ages allows you to understand these people not only in terms of evidence but also in terms of their humanity, their hopes and fears, the drama of their lives. Although writers have traditionally been forced to resort to historical fiction to do this, there is no reason why a nonfiction writer should not present his material in just as direct and as sympathetic a manner. It does not make the facts themselves less true to put them in the present tense rather than the past.

In some senses this idea is not new. For many decades architectural historians have been re???creating images of castles and monasteries as they appeared in their heyday. Museum curators similarly have reconstructed old houses and their interiors, filling them with the furniture of a past age. Groups of individuals have formed reenactment societies, attempting to discover what it was like to live in a different time through the bold, practical experiment of donning period clothing and cooking with a cauldron on an open fire, or trying to wield a replica sword while wearing heavy armor. Collectively they remind us that history is much more than an educational process. Understanding the past is a matter of experience as well as knowledge, a striving to make spiritual, emotional, poetic, dramatic, and inspirational connections with our forebears. It is about our personal reactions to the challenges of living in previous centuries and earlier cultures, and our understanding of what makes one century different from another.

The nearest historians have come to considering the past at first hand is the genre of "what if ?" or "virtual history." This is where historians consider what would have happened if things had turned out differently. For example, what if Hitler had invaded Britain in 1940? What if the Spanish Armada had been successful? While such speculations are open to the obvious criticism that these things did not happen (with the implication that there is no point considering them), they have the great virtue of taking the reader directly to a moment in time and presenting events as if they were still unfolding. This can bring a real immediacy to a narrative. Put yourself in the shoes of the duke of Wellington at Waterloo, or Nelson at Trafalgar: they were only too well aware of the consequences of defeat. So too were their political masters back in England. They certainly considered the past that never was; so to reconstruct what might otherwise have happened brings us closer to those leaders in the moments of their decision-making. Just think: if Henry IV had not returned to Englandin 1399 to remove Richard II from power, we would have had several more years -- perhaps many more -- of Richard's tyrannical rule, probably resulting in the destruction of the Lancastrian dynasty and all those who supported it. In the spring of 1399 that likelihood was the key political issue and one of the reasons why Henry did return. It was also the principal reason why so many men supported him. In this way it is clear that seeing events as happening is crucial to a proper understanding of the past, even if the results are just as speculative now as they were at the time.

Virtual history as described above is only useful for understanding political events; it has relatively little value for social history. We cannot profitably speculate on what might have happened if, say, the Black Death had not come to Europe; it was not a matter of decisionmaking. But as with a reconstruction of a typical medieval house, virtual time travel allows us a clearer, more integrated picture of what it was like to live in a different age. In particular, it raises many questions which previously may not have even occurred to us and which do not necessarily have easy answers. How do people greet each other in the Middle Ages? What is their sense of humor like? How far away from home do individuals travel? Writing history from the point of view of our own curiosity forces us to consider a number of questions that traditional history books tend to ignore.

Medieval England is potentially a vast destination for the historical traveler. The four centuries between the Norman invasion and the advent of printing see huge changes in society. The "Middle Ages" are exactly that -- a series of ages -- and a Norman knight would find himself as out of place preparing for a late-fourteenth-century battle as an eighteenth-century prime minister would if he found himself electioneering today. For this reason, this guidebook concentrates on just one century, the fourteenth. This period comes closest to the popular conception of what is "medieval," with its chivalry, jousts, etiquette, art, and architecture. It might even be considered the epitome of the Middle Ages, containing civil wars, battles against the neighboring kingdoms of Scotland and France, sieges, outlaws, monasticism, cathedral building, the preaching of friars, the flagellants, famine, the last of the Crusades, the Peasants' Revolt, and (above all else) the Black Death.

Having emphasized that the focus of this book is fourteenthcentury England, a few caveats must be added. It is not possible to recover every detail of the period on the basis of fourteenth-century English evidence alone; sometimes the contemporary record is frustratingly incomplete. Also we cannot always be sure that the manner of doing something in 1320 necessarily held true in 1390. In some cases we can be sure that things changed dramatically: the entire nature of English warfare altered over this period, and so did the landscape of disease, with the catastrophic advent of the plague in 1348. Thus, where necessary, details from the fifteenth century have been used to inform descriptions of the later part of the fourteenth century, and the thirteenth century has been used to inform judgments about the early part. This blurring of time boundaries is only necessary where very difficult questions are raised. For example, we have relatively few sources underpinning our understanding of courtesy and manners in the fourteenth century whereas we have several excellent sources for the early fifteenth. Since it is unlikely that good manners developed overnight, the later evidence has been used as the fullest and most accurate available.

Many types of source material have been used in writing this book. Needless to say, contemporary primary sources are of vital importance. These include unpublished and published chronicles, letters, household accounts, poems, and advisory texts. Illuminated manuscripts show daily life in ways which the texts do not always describe: for example, whether women rode sidesaddle. A wealth of architectural evidence is available in the extant buildings of fourteenthcentury England -- the houses as well as the castles, churches, and monasteries -- and the ever-expanding literature about them provides even more information. In some cases we have documents which complement the architectural record: building accounts and surveys, for example. We have an increasing array of archaeological finds, from excavated tools, shoes, and clothes to the pips of berries found in medieval latrines, and fish bones on the waterlogged sites of ancient ponds. We have a plethora of more usual archaeological artifacts too, such as coins, ceramics, and ironware. The extent to which a good museum can give you an insight into how life was lived in the Middle Ages is restricted only by your own curiosity and imagination.

But most of all, it needs to be said that the very best evidence for what it was like to be alive in the fourteenth century is an awareness of what it is like to be alive in any age, and that includes today. Our sole context for understanding all the historical data we might ever gather is our own life experience. We might eat differently, be taller, and live longer, and we might look at jousting as being unspeakably dangerous and not at all a sport, but we know what grief is and what love, fear, pain, ambition, enmity...

1. The Time Traveller's Guide to Medieval England: A Handbook for Visitors to the Fourteenth Century

2. The Time Traveller's Guide to Medieval England: A Handbook for Visitors to the Fourteenth Century