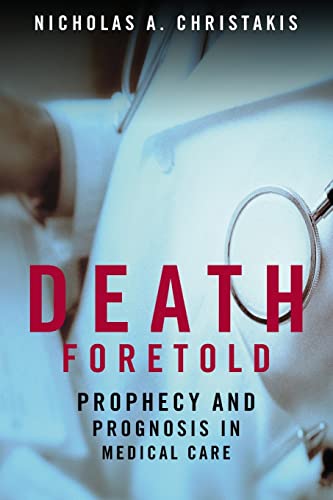 This groundbreaking book explains prognosis from the perspective of doctors, examining why physicians are reluctant to predict the future, how doctors use prognosis, the symbolism it contains, and the emotional difficulties it involves. Drawing on his experiences as a doctor and sociologist, Nicholas Christakis interviewed scores of physicians and searched dozens of medical textbooks and medical school curricula for discussions of prognosis in an attempt to get to the core of this nebulous medical issue that, despite its importance, is only partially understood and rarely discussed.

"Highly recommended for everyone from patients wrestling with their personal prognosis to any medical practitioner touched by this bioethical dilemma."—Library Journal, starred review

"[T]he first full general discussion of prognosis ever written. . . . [A] manifesto for a form of prognosis that's equal parts prediction-an assessment of likely outcomes based on statistical averages-and prophecy, an intuition of what lies ahead."—Jeff Sharlet, Chicago Reader

"[S]ophisticated, extraordinarily well supported, and compelling. . . . [Christakis] argues forcefully that the profession must take responsibility for the current widespread avoidance of prognosis and change the present culture. This prophet is one whose advice we would do well to heed."—James Tulsky, M.D., New England Journal of Medicine

"How long do I have, doctor?" It's one of the most critical questions patients ask, yet doctors rarely want to discuss the answer out of reluctance to think about or predict the future. In this groundbreaking book, Nicholas A. Christakis explains prognosis from the perspective of physicians. His argument is impassioned. As Gina Kolata writes in the New York Times, "Dr. Nicholas A. Christakis . . . burns with a mission: to bring prognosis into what he sees as its rightful place in medicine." The result is a work that gets to the core of this nebulous medical issue that, despite its importance, is only partially understood and rarely discussed.

Nicholas A. Christakis, M.D., Ph.D., directs the Human Nature Lab at Yale University, where he is appointed as the Sol Goldman Family Professor of Social and Natural Science, and he is the co-director of the Yale Institute for Network Science.

3. Death Foretold and#8211; Prophecy and#38; Prognosis in Medical Care

Book Description The University of Chicago Press, United States, 2001. Paperback. Condition: New. New edition. Language: English. Brand new Book. This text explains the act of prognosis in its varying forms - doctors telling patients if their cancer is curable, when their pain will stop, if they will live to see their child graduate from college - from the perspective of doctors. Nicholas Christakis examines why physicians are reluctant to predict the future, what uses doctors make of prognosis, the symbolism it contains, and the practical and emotional difficulties it involves. Drawing on his experiences both as a doctor and as a sociologist, the author conducted interviews with physicians; he searched medical textbooks and medical school curricula for discussions of prognosis; and he developed quantitative data showing that physicians are systematically optimistic in their predictions. With its combination of approaches and methods, this book is a study of a murky area of medical practice that, despite its importance, is only partially understood and rarely discussed. Christakis argues that physicians and the medical profession as a whole have the duty to prognosticate, and shirking the difficult questions - as most doctors tend to do - advances neither medical knowledge nor the care seriously ill patients receive.The book aims to be a clarion call for a renewed effort to understand and improve the art and science of prognostication. Seller Inventory # AAH9780226104713

Book Description Paperback. Condition: New. New edition. Paperback. This groundbreaking book explains prognosis from the perspective of doctors, examining why physicians are reluctant to predict the future, how doctors use prognosis, the symbolism it conta.Shipping may be from multiple locations in the US or from the UK, depending on stock availability. 374 pages. 0.463. Seller Inventory # 9780226104713