Items related to Pulled Over: How Police Stops Define Race and Citizenship... 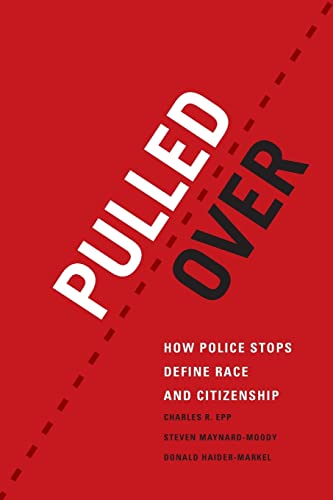 In sheer numbers, no form of government control comes close to the police stop. Each year, twelve percent of drivers in the United States are stopped by the police, and the figure is almost double among racial minorities. Police stops are among the most recognizable and frequently criticized incidences of racial profiling, but, while numerous studies have shown that minorities are pulled over at higher rates, none have examined how police stops have come to be both encouraged and institutionalized.

Pulled Over deftly traces the strange history of the investigatory police stop, from its discredited beginning as “aggressive patrolling” to its current status as accepted institutional practice. Drawing on the richest study of police stops to date, the authors show that who is stopped and how they are treated convey powerful messages about citizenship and racial disparity in the United States. For African Americans, for instance, the experience of investigatory stops erodes the perceived legitimacy of police stops and of the police generally, leading to decreased trust in the police and less willingness to solicit police assistance or to self-censor in terms of clothing or where they drive. This holds true even when police are courteous and respectful throughout the encounters and follow seemingly colorblind institutional protocols. With a growing push in recent years to use local police in immigration efforts, Hispanics stand poised to share African Americans’ long experience of investigative stops.

In a country that celebrates democracy and racial equality, investigatory stops have a profound and deleterious effect on African American and other minority communities that merits serious reconsideration. Pulled Over offers practical recommendations on how reforms can protect the rights of citizens and still effectively combat crime.

“Pulled Over succeeds in providing convincing evidence—the most exhaustive to date—demonstrating how pernicious racism can be at an institutional level without anyone specifically intending that result and with the intention perhaps running in the opposite direction. This is significant research on a fundamental issue presented in a clear, exhaustive manner, and it takes our knowledge of policing a big step further, offering in the process a clear prescription for reform. The book should be of interest to everyone concerned about the way American institutions perpetuate racism.”
(Doris Marie Provine, Arizona State University)

“This timely volume uses a multifaceted empirical analysis which focuses on street stop experiences among white and minority respondents to examine a central and continuing issue within contemporary American policing. Combining a careful historical exploration of police policies and practices with the results of surveys and in-person interviews, Epp, Maynard-Moody, and Haider-Markel offer a sophisticated and illuminating examination of the experience of police stops. Their efforts identify an important distinction between traffic and investigatory stops and locate race-based problems with the latter type of experience. Polite and respectful police demeanor, while to some extent palliative, cannot assuage the damaging effects of the widespread and systematic use of this policing technique on the minority community. This is a very good read and a compelling inquiry into the impact of police actions on white and minority motorists." (Tom R. Tyler, Yale Law School)

“A searing portrayal of the everyday indignities borne by African Americans in their routine encounters with the police on the nation’s highway and streets. The authors expose the willful racial blindsight of police and the courts to the evolution of the ‘investigatory stop’ from its modest role in fighting crime to a sharp-edged weapon that corrodes the citizenship and belonging of African Americans and Latinos. The harrowing narratives and careful statistical analysis leave little doubt that police stops on the highways are racially tinged with disrespect for citizens while signaling to them and us that minority drivers have little power or prospects for equal treatment before the law. Pulled Over shines light on the institutional norms where there is leverage for reform through respectful and lawful policing.” (Jeffrey A. Fagan, Isidor and Seville Sulzbacher Professor of Law, Columbia Law School)

“In recent decades, investigatory police stops have become a mainstay of American law enforcement. To my mind, Pulled Over is the definitive account of this development, but it is also far more than that. Epp, Maynard-Moody, and Haider-Markel have produced a masterly study of how state authority and citizenship are organized, racialized, and experienced in the United States today. I recommend the book most of all to those who’ve grown tired of stale debates about whether the targeted policing of young black men is “racist” or “rational.” In these pages, you will find a richer perspective informed by careful statistical analysis and stories from both sides of the police stop. You will also find prose that is a pleasure to read and compelling reasons to believe that we can and must do better.” (Joe Soss, University of Minnesota)

“A valuable tool for teaching the cultural impact that law and police policies create, as well as providing a source for discussion when instructing on ethnographic research. As a means for explaining the premise of institutionalized racial framing and its history in US policing, the level of implementation, and the experiences of those to whom they are applied, this book is informative, thought provoking, and easily digested. . . .  Epp, Maynard-Moody, and Haider-Markel provide a lasting impression of how investigative intrusions create and change society's shared expectation of racial stereotypes and damage interracial relationships on the ground. . . . Highly recommended.” (Choice 2014-10-21)

“Based on my reading of Pulled Over, I now think of the choices involved in racial profiling (or, in policies deliberately chosen to avoid racial disparities in police stops) as representing a conflict within the police, a tradeoff between different aspects of controlling crime. Their data and analysis can be viewed as a case study, narrowly focused on traffic stops in a single metro area in one particular time period, but Epp, Maynard-Moody, and Haider-Harkel use the insights thus obtained to give a general sense of the ways in which racially disparate police policies can have apparent short-term utility while being counterproductive of the larger goals of policing.” (Criminal Law and Criminal Justice Books 2014-10-28)

"A thoughtful, penetrating, and timely analysis of the causes, experiences, and effects of discriminatory police stops. . . . Pulled Over offers a corrective to a number of our existing accounts of racially inequitable police encounters. While the findings presented are troubling, it is not a fatalistic account. . . . [The book] advances a number of sensible police reforms, including more stringent criteria for justifying stops, investigatory bodies to review stop patterns, and a prohibition on searches unless based on probable cause. An exemplary piece of scholarship." (Theoretical Criminology 2015-02-02)

“It is rare to read a new book that makes important contributions to multiple fields and literatures. It is rarer still when the book addresses the interrelation of race, perceived criminality, and policing—historically fraught affiliations that remain so despite being extensively explored within law and social science research. In Pulled Over, the authors make these important contributions. . . . Pulled Over is sophisticated, comprehensive, and methodologically diverse. . . . I commend it to all scholars interested in meaningfully engaging the myriad and complex ways that police stops affect racial identity and conceptions of citizenship.” (Law and Society Review 2015-02-24)

“A very important book. . . . The arguments here are vital for how we think about how the state—and especially the criminal justice face of it—shapes citizenship. . . . Pulled Over should be required reading for folks interested either in citizenship or policing." (American Journal of Sociology 2015-07-15)

Pulled Over : How Police Stops Define Race and Citizenship

Shipping: US$ 4.87
From United Kingdom to U.S.A.
Destination, rates & speeds

Pulled Over: How Police Stops Define Race and Citizenship (Chicago Series in Law and Society) Paperback

Pulled Over - How Police Stops Define Race and Citizenship