Items related to Aeschylus I: Oresteia: Agamemnon, The Libation Bearers,... 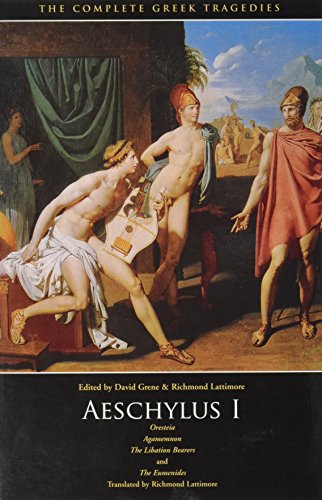 "These authoritative translations consign all other complete collections to the wastebasket."—Robert Brustein, The New Republic

"This is it. No qualifications. Go out and buy it everybody."—Kenneth Rexroth, The Nation

"The translations deliberately avoid the highly wrought and affectedly poetic; their idiom is contemporary....They have life and speed and suppleness of phrase."—Times Education Supplement

"These translations belong to our time. A keen poetic sensibility repeatedly quickens them; and without this inner fire the most academically flawless rendering is dead."—Warren D. Anderson, American Oxonian

"The critical commentaries and the versions themselves...are fresh, unpretentious, above all, functional."—Commonweal

"Grene is one of the great translators."—Conor Cruise O'Brien, London Sunday Times

"Richmond Lattimore is that rara avis in our age, the classical scholar who is at the same time an accomplished poet."—Dudley Fitts, New York Times Book Review

2. Aeschylus I: Oresteia. Agamemnon, The Libation Bearers, The Eumenides