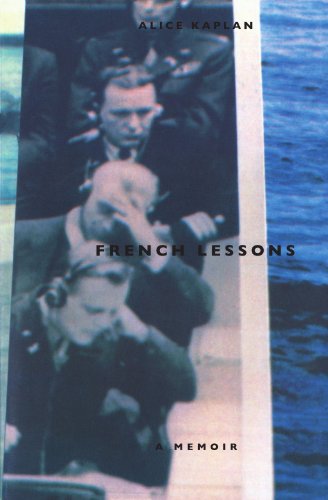 Brilliantly uniting the personal and the critical, French Lessons is a powerful autobiographical experiment. It tells the story of an American woman escaping into the French language and of a scholar and teacher coming to grips with her history of learning. Kaplan begins with a distinctly American quest for an imaginary France of the intelligence. But soon her infatuation with all things French comes up against the dark, unimagined recesses of French political and cultural life.

The daughter of a Jewish lawyer who prosecuted Nazi war criminals at Nuremburg, Kaplan grew up in the 1960s in the Midwest. After her father's death when she was seven, French became her way of "leaving home" and finding herself in another language and culture. In spare, midwestern prose, by turns intimate and wry, Kaplan describes how, as a student in a Swiss boarding school and later in a junior year abroad in Bordeaux, she passionately sought the French "r," attentively honed her accent, and learned the idioms of her French lover.

When, as a graduate student, her passion for French culture turned to the elegance and sophistication of its intellectual life, she found herself drawn to the language and style of the novelist Louis-Ferdinand Celine. At the same time she was repulsed by his anti-Semitism. At Yale in the late 70s, during the heyday of deconstruction she chose to transgress its apolitical purity and work on a subject "that made history impossible to ignore:" French fascist intellectuals. Kaplan's discussion of the "de Man affair" — the discovery that her brilliant and charismatic Yale professor had written compromising articles for the pro-Nazi Belgian press—and her personal account of the paradoxes of deconstruction are among the most compelling available on this subject.

French Lessons belongs in the company of Sartre's Words and the memoirs of Nathalie Sarraute, Annie Ernaux, and Eva Hoffman. No book so engrossingly conveys both the excitement of learning and the moral dilemmas of the intellectual life.

An original and engaging memoir about a young girl seduced by the French language, its forms, and its culture. French Lessons is not just a growing-up story, but a story about language, the compulsion to embrace foreigness to discover oneself, and the growth of intellectual awareness.

Alice Kaplan is the author of French Lessons: A Memoir, The Collaborator, The Interpreter, and Dreaming in French: The Paris Years of Jacqueline Bouvier Kennedy, Susan Sontag, and Angela Davis, and the translator of OK, Joe, The Difficulty of Being a Dog, A Box of Photographs, and Palace of Books. Her books have been twice finalists for the National Book Critics Circle Awards, once for the National Book Award, and she is a winner of the Los Angeles Times Book Prize. She holds the John M. Musser chair in French literature at Yale. She lives in Guilford, Connecticut.