Items related to Infinity Net: The Autobiography of Yayoi Kusama 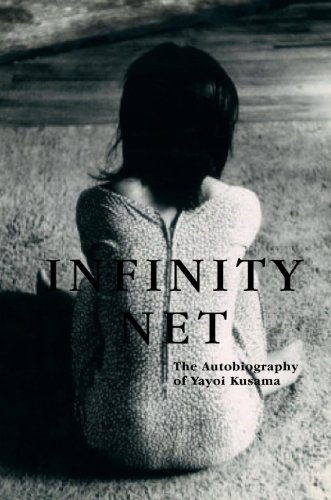 Available for the first time in English, Infinity Net paints a multilayered portrait of this fascinating artist. Taking us from her oppressive childhood in postwar Japan to her present life in the psychiatric hospital where she voluntarily stays—and is still productive—Kusama’s autobiography offers insight into the persona of mental illness that has informed her work. While she vibrantly describes the hallucinatory episodes she experiences, her tale is punctuated by stories of her pluck and drive in making her artistic voice heard. Conveying the breadth and ambition of her own work, Kusama also offers a dazzling snapshot of 1960s and 1970s New York City and her encounters with its artists—she collaborates with Andy Warhol, shares an apartment with Donald Judd, and becomes romantically entangled with Joseph Cornell. Replete with the sense of the sheer necessity within an artist to create, Infinity Net is an energetic and juicy page-turner that offers a glimpse into Kusama’s exhilarating world.

Yayoi Kusama is a Japanese artist who works in many mediums and is the recipient of numerous honors, including the Praemium Imperiale. She is the author of Hustlers Grotto of Christopher Street, among other books. Ralph McCarthy is a literary translator whose work includes Dazai Osamu’s Self Portraits and Blue Bamboo and Ryu Murakami’s Sixty-Nine and Love & Pop.

“Like her paintings, veiled with a lively yet chilling surface of dots, [Kusama’s] book evokes the intensity and ‘insanity’ of her life only remotely, through vivid, unsentimental descriptions. . . . Focusing on the facts and employing an impersonal tone, she writes as though she were presenting someone else’s biography rather than her own. In this rather paradoxical way, the book brings us subtly closer to Kusama, who remains, in both her private life and her work, extremely self-absorbed and self-expressive yet stubbornly evasive and mysterious.”

“There is something restorative, refreshingly sincere, even magical about [Kusama’s] work. It speaks for itself, suggesting that it’s not so much whether she’s an outsider or an insider that matters but how her story dispenses with that distinction altogether.” (Sharon Mizota Los Angeles Review of Books)

“[Infinity Net] reminds us that Kusama’s abiding, driving energy, which has found compelling expression in her work’s love-sexy titillations, despite—or because of—her magnificent obsessions, is and has been the real, central subject of her art.”

“Even with its mix of real and created memories, Infinity Net is valuable as it suggests many blind spots in the way official history is constructed, blind spots that can spur art historians to uncover specific historical fragments and destabilize the art-historical status quo. Only within such a context can an artist such as Kusama be fully appraised—and appreciated.” (Women's Art Journal)