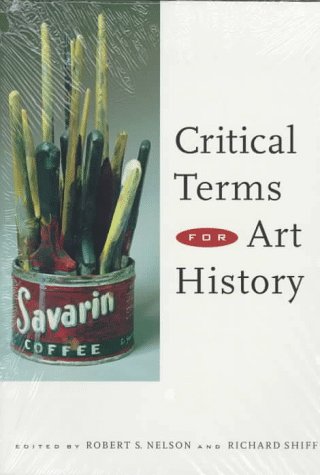 The nature of the visual has, over the past decade, moved to the center of debates in the humanities. No longer simply the study of timeless masterpieces, art history as a discipline is now addressing some of the most basic questions about cultural production, questions such as how images function and how expectations and social factors mediate what we see. The new scope of art history has required a major expansion and reassessment of methods and terminology.

Edited by Robert Nelson and Richard Shiff, Critical Terms for Art History is both an exposition and a demonstration of contested terms from the current art historical vocabulary. In individual essays, scholars examine the history and use of these terms by grounding their discussions in single works of art, reading each work through current debates and methods. This instructive combination of theory and practice allows readers to examine the terms as they are seeing them employed. In its wide representation of contemporary discourse, Critical Terms for Art History is a comprehensive effort to map historical and theoretical debates over the visual environment.

Like its companion, Critical Terms for Literary Study, this book will prove an invaluable resource both for those beginning to learn about the visual theory and for scholars and historians.

"Art" has always been contested terrain, whether the object in question is a medieval tapestry or Duchamp's Fountain. But questions about the categories of "art" and "art history" acquired increased urgency during the 1970s, when new developments in critical theory and other intellectual projects dramatically transformed the discipline. The first edition of Critical Terms for Art History both mapped and contributed to those transformations, offering a spirited reassessment of the field's methods and terminology.

Art history as a field has kept pace with debates over globalization and other social and political issues in recent years, making a second edition of this book not just timely, but crucial. Like its predecessor, this new edition consists of essays that cover a wide variety of "loaded" terms in the history of art, from sign to meaning, ritual to commodity. Each essay explains and comments on a single term, discussing the issues the term raises and putting the term into practice as an interpretive framework for a specific work of art. For example, Richard Shiff discusses "Originality" in Vija Celmins's To Fix the Image in Memory, a work made of eleven pairs of stones, each consisting of one "original" stone and one painted bronze replica.

Robert S. Nelson is a Distinguished Service Professor of Art History and History of Culture at the University of Chicago. Lately he has edited Visuality before and beyond the Renaissance: Seeing as Others Saw and is currently working on a book about the modern lives of Hagia Sophia in Istanbul.

Richard Shiff is the Effie Marie Cain Regents Chair in Art and director of the Center for the Study of Modernism at the University of Texas at Austin. He is the author of Cezanne and the End of Impressionism: A Study of the Theory, Technique, and Critical Evaluation of Modern Art.