Items related to Democracy in America 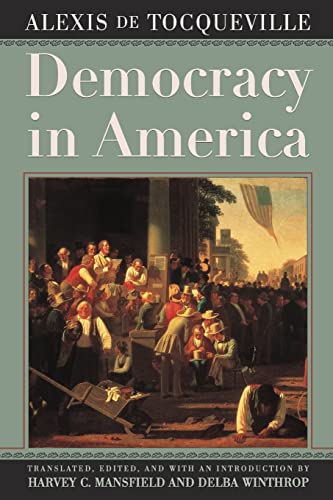 Alexis de Tocqueville (1805-59) came to America in 1831 to see what a great republic was like. What struck him most was the country's equality of conditions, its democracy. The book he wrote on his return to France, Democracy in America, is both the best ever written on democracy and the best ever written on America. It remains the most often quoted book about the United States, not only because it has something to interest and please everyone, but also because it has something to teach everyone.

When it was published in 2000, Harvey Mansfield and Delba Winthrop's new translation of Democracy in America—only the third since the original two-volume work was published in 1835 and 1840—was lauded in all quarters as the finest and most definitive edition of Tocqueville's classic thus far. Mansfield and Winthrop have restored the nuances of Tocqueville's language, with the expressed goal "to convey Tocqueville's thought as he held it rather than to restate it in comparable terms of today." The result is a translation with minimal interpretation, but with impeccable annotations of unfamiliar references and a masterful introduction placing the work and its author in the broader contexts of political philosophy and statesmanship.

Harvey C. Mansfield is the William R. Kenan Jr. Professor of Government at Harvard University. Political philosopher and author, he is acknowledged as a leading translator of Machiavelli.

Delba Winthrop is a Lecturer in Extension and administrator of the Program on Constitutional Government at Harvard University. Her articles and essays have appeared in numerous publications.

"The editors have written more than a mere introduction; they have written in fact a small book, a remarkably comprehensive and yet succinct study of Tocqueville's political thought. . . . Mansfield and Winthrop have made a remarkably comprehensive and tightly argued case for Tocqueville as the greatest political theorist of democracy, a theorist who is just as relevant today as he was in the nineteenth century." (Gordon S. Wood New York Review of Books)

"It would be difficult to think of a greater service to the study of Tocqueville than the one performed by Mansfield and Winthrop in their impeccable new edition and translation of Democracy in America. . . . The publisher is justified in claiming that this version will henceforth be seen as the 'authoritative' edition in English." (Choice)

"The Mansfield-Winthrop work will henceforth be the preferred English version of Democracy in America not only because of the superior translation and critical apparatus, but also because of its long and masterly introductory essay, itself an important contribution to the literature on Tocqueville." (Roger Kimball The New Criterion)

"If Tocqueville is an indispensable guide to understanding the American experience, Harvey C. Mansfield and Delba Winthrop are indispensable guides to Tocqueville himself. In the introduction to their fresh and limpid translation of Democracy in America—what will surely be the definitive translation for some time to come—they offer a helpful summary of Tocqueville's philosophical and political thought." (Thomas Pavel Wall Street Journal)

"Democracy in America will continue to be read with profit as long as the United States survives as a republic and, indeed, as long as democracy endures. It deserves faithful translators, careful expositors and insightful commentators. In Mansfield and Winthrop it has found them." (Robert P. George Times Literary Supplement)

"[A] major new translation. . . . Tocqueville's insights confirm his brilliance and remind us that many features of national character are virtually indestructible." (Robert J. Samuelson Newsweek)

"This will be the English translation of Tocqueville for a long time, and it has the additional bonus that the introduction is as succinct an introduction to Tocqueville, or at least to the conservative view of him and his achievement, as one can find." (Adam Gopnik The New Yorker)

Democracy in America (Paperback or Softback)