Independents Rising: Outsider Movements, Third Parties, and the Struggle for a Post-Partisan America 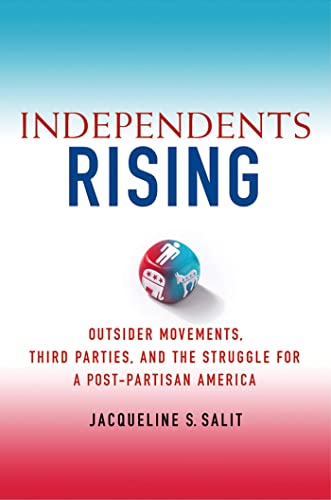 A revealing look at how independent voters have been upending the political establishment for thirty years – and how they'll decide the future of American politics.

In a political system where two parties reign supreme, 40% of Americans consider themselves neither Democrats nor Republicans, but independents. Independents elected President Barack Obama in 2008 and then, in a seeming reversal, gave control of Congress to the Republicans in 2010. But who are these independents? Angry moderates? Frustrated ideologues? The base for the third party? Reformers or revolutionaries? Jacqueline Salit has spent 30 years as an insider in this growing movement of outsiders. She recounts the little-known history of this volatile force as old political institutions and categories are becoming irrelevant – even repugnant – to many Americans. An architect of unorthodox left/right coalitions within the Perot movement and Reform Party, and manager of Michael Bloomberg's three New York mayoral campaigns on the Independence Party line, Salit explores how these unclaimed voters are not only deciding elections, but reshaping the political landscape. With a surprising cast of characters – from the famous to the unknown – Salit argues that the failure to heed this movement against partisanship (and even parties) puts political careers at risk and damages essential features of American democracy. She reveals how independents underestimate their own power and how they can make the most of their newfound moment in the sun.

Jacqueline S. Salit is the president of IndependentVoting.org, the country's leading strategy and organizing center for independents, with chapters in 40 states, and the publisher of The Neo-Independent magazine. Her political commentary has appeared in countless publications and she has been featured on CNN, MSNBC, CNBC, CBC, PBS, FOX and CSPAN. Salit is also a regular contributor to the nationally syndicated radio program The Fairness Doctrine and produced Talk/Talk with the late public philosopher Fred Newman. She lives in New York City.

“A street-level look at the grassroots activism of independent politics...stand(s) alongside stand alongside the best political policy books of this presidential season.” ―The Daily Beast

“In Independents Rising Jackie Salit shares with lively stories her decades of experience in the trenches of outsider politics. Her first-hand narrative documents the extraordinary difficulty of organizing Independents and minor parties in the United States--and spells out her vision for how electoral politics must compete for Independent voters.” ―Theresa Amato, author of Grand Illusion: The Myth of Voter Choice in a Two-Party Tyranny

“As our elected officials have become increasingly partisan, many Americans have chosen to abandon their party affiliations and join the ranks of political independents. It's a major shift in the way we govern ourselves and Jackie Salit does an impressive job of describing how this change has taken place and its implications for the politics of the future.” ―Mickey Edwards, author of The Parties Versus The People: How to Turn Republicans and Democrats Into Americans

“The rise of independent voters is the most significant demographic shift in modern American politics. In Independents Rising, Jackie Salit gives her passionate personal perspective on this important and still emerging trend. It offers insight into both national and New York politics, a street-level view on the fight for election reform.” ―John Avlon, Newsweek/Daily Beast columnist and author of Independent Nation

“Jackie Salit has written the definitive book about Independents, Third Parties and a Post-Partisan America. I have learned much from Jackie and I believe you will too.” ―Doug Schoen, author of Hopelessly Divided, and coauthor of Mad As Hell

“A terrific and compelling history of independent voters in America. Salit is uniquely qualified to chronicle this story. The book will be a timely addition to the national discussion as the 2012 campaign kicks into high gear.” ―Thomas F. McClarty, former White House Chief of Staff to President Bill Clinton

“Independents Rising is an intimate insider's account of a growing grassroots movement by voters who are no longer willing to play traditional partisan roles. Read it and consider what it might take to have our government and elected leaders have an 80% approval rating!” ―Joan Blades, co-founder LivingRoomConversations.org, MomsRising.org and MoveOn.org

“As she explains the pitfalls of political life, the author demonstrates her expertise in the fight to give nonpartisan voters a more potent voice in the democratic process. Fighting against the strong political machines of a two-party system may seem Sisyphean now, but Salit's story of how well they've done so far inspires hope that one day they will succeed.” ―Kirkus Reviews

“Earnest and informative . . . Covering both national and regional concerns, the book is strongest when it demystifies the movement itself . . . [INDEPENDENTS RISING] gives necessary voice to voters who are fed up with partisan politics and desire change.” ―Publishers Weekly

“The number of Independent voters is rising along with their discontent with both major political parties and what they have done to our political system. Independents are tired of the partisan polarization and dysfunction and want something different. From an inside perspective Jacqueline Salit describes the decades-long struggle for Independent voters to be recognized and make their voices heard.” ―Linda Killian, author of The Swing Vote: The Untapped Power of Independents and senior scholar at the Woodrow Wilson International Center for Scholars

1. Independents Rising: Outsider Movements, Third Parties, and the Struggle for a Post-Partisan America

2. Independents Rising: Outsider Movements, Third Parties, and the Struggle for a Post-Partisan America

3. Independents Rising: Outsider Movements, Third Parties, and the Struggle for a Post-Partisan America

4. Independents Rising: Outsider Movements, Third Parties, and the Struggle for a Post-Partisan America

5. Independents Rising: Outsider Movements, Third Parties, and the Struggle for a Post-Partisan America

6. Independents Rising: Outsider Movements, Third Parties, and the Struggle for a Post-Partisan America