Items related to The Columbia Guide to the Holocaust

The Columbia Guide to the Holocaust 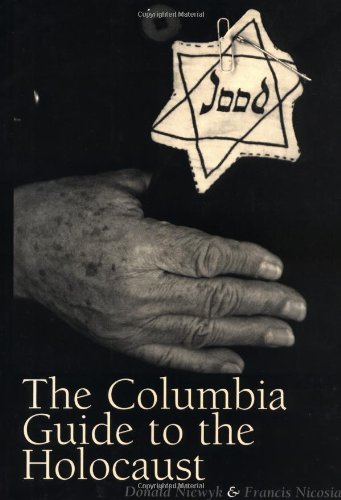 Offering a multidimensional approach to one of the most important episodes of the twentieth century, The Columbia Guide to the Holocaust offers readers and researchers a general history of the Holocaust while delving into the core issues and debates in the study of the Holocaust today.

Each of the book's five distinct parts stands on its own as valuable research aids; together, they constitute an integrated whole. Part I provides a narrative overview of the Holocaust, placing it within the larger context of Nazi Germany and World War II. Part II examines eight critical issues or controversies in the study of the Holocaust, including the following questions: Were the Jews the sole targets of Nazi genocide, or must other groups, such as homosexuals, the handicapped, Gypsies, and political dissenters, also be included? What are the historical roots of the Holocaust? How and why did the "Final Solution" come about? Why did bystanders extend or withhold aid?

Part III consists of a concise chronology of major events and developments that took place surrounding the Holocaust, including the armistice ending World War I, the opening of the first major concentration camp at Dachau, Germany's invasion of Poland, the failed assassination attempt against Hitler, and the formation of Israel.

Armed with the tools contained in this volume, students or researchers investigating this vast and complicated topic will gain an informed understanding of one of the greatest tragedies in world history.

This invaluable resource provides a multidimensional survey of the Holocaust, essentially integrating five separate books into one comprehensive reference tool: a historical overview; a guide to Holocaust controversies; an A-to-Z encyclopedia of people, places, and terms; a chronology; and a comprehensive resource guide. Whether used separately for their individual merits or approached as an integrated whole, the five sections of this informative volume constitute an indispensable contribution to the study of the Holocaust.

Donald L. Niewyk is professor of history at Southern Methodist University and is the author of four books, including Fresh Wounds: Early Narratives of Holocaust Survival.

Francis R. Nicosia is professor of history at Saint Michael's College and is the author or editor of several books on the Holocaust and the Third Reich, including The Third Reich and the Palestine Question.

1. THE COLUMBIA GUIDE TO THE HOLOCAUST

2. The Columbia Guide to the Holocaust

3. The Columbia Guide to the Holocaust