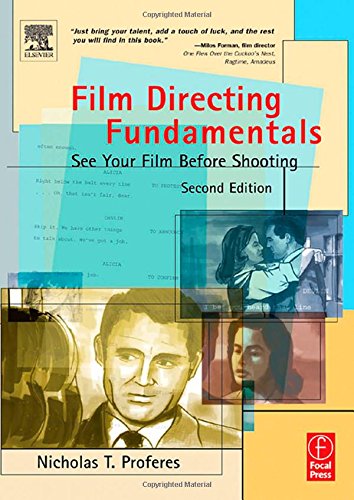 Unique among directing books, Film Directing Fundamentals provides a clear-cut methodology for translating a script to the screen. Using the script as a blueprint, Proferes leads the reader through specific techniques to analyze and translate its components into a visual story. A sample screenplay is included that explicates the techniques. The book assumes no knowledge and thus introduces basic concepts and terminology.

* Unique, focused approach to film directing that shows how to use the screenplay as a blueprint
* Clear-cut methodology for translating a script to the screen
* Case studies featuring famous films

A cornerstone of this methodology is the assumption that the blueprint of a film, the screenplay, informs everything the director does. The reader will discover how to unlock the dramatic potential in the screenplay by careful reading and analysis. A short screenplay is provided to take you step by step through the detective work necessary to uncover the strengths and weaknesses in the script and the psychology of the characters, and to break down the actions they perform in pursuit of their goals. This investigation leads to an overall design for rendering the film, as well as identifying the essence of each moment that must be conveyed to an audience. In subsequent chapters the methodology applies the knowledge gained in the detective work to the staging of actors for the camera and the use of the camera as an active narrator. Using floorplans and storyboards to aid in the previsualization of a film is also stressed. Part Two features a scene by scene analysis of three feature films by master directors, to be used in conjunction with the viewing of the films on video. This will enable the aspiring director to see how the conceptual investigation is rendered on the screen. In addition, nine films that are readily available on video are analyzed for the use of a distinctive style in the rendering of a story. An appendix is included, containing the grammatical rules for the film language, as well as a thorough explanation of the cinematic categories of time and space and how they can be used to maximize the effect of any story on an audience.