Items related to Directing the Documentary 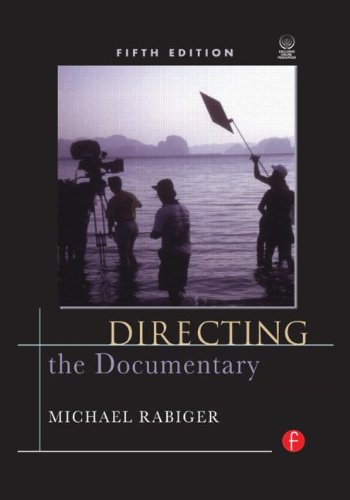 Directing the Documentary is a comprehensive manual that has inspired over 100,000 readers worldwide. If you are interested in making documentary films, everything you need technically and conceptually is here. Filled with practical advice on every stage of production, this is the book you will return to throughout your career.

Directing the Documentary covers the methods, technologies, thought processes, and judgments that a director must use throughout the fascinating process of making a film. It emphasizes low-cost digital technology, which allows cutting-edge creativity and professionalism on shoestring budgets. And, recognizing that you learn best by doing, the book includes dozens of practical hands-on projects and activities to help you master technical and conceptual skills.

Just as important as surmounting technological hurdles is the conceptual and authorial side of filmmaking. This book offers eminently practical tools and exercises to help you develop credible and compelling stories. It shows you how to surpass mere technical proficiency and become a storyteller with a distinctive voice and style.

Directing the Documentary is the definitive and comprehensive book on the form, offering timeless principles that will improve your work. Ideal for documentary courses as well as aspiring and current directors, Directing the Documentary covers all phases of preproduction and production. The emphasis is on the hands-on work needed to make your concept a reality, and to that end dozens of projects, exercises, and idea-provoking questionnaires are included. Covering both the fundamental basics and advanced issues in documentary production, the book includes researching and honing a documentary idea, developing a crew, directing the team, and maininting control throughout shooting.

* Comprehensive manual on the creative, technical, and artistic aspects of directing--become an inspired director!

* Realistic advice and encouragement from a highly regarded filmmaker, mentor, and teacher to help you on your path

* Companion website features handy production checklists and forms, videos for some of the films discussed in the book, and a master bibliography:

Michael Rabiger has directed or edited over 35 films, founded the Documentary Center at Columbia College, Chicago, and was Chair of its Film/Video Department. Now Professor Emeritus, Rabiger has also been presented with the Preservation and Scholarship Award by the International Documentary Association. He has given workshops in many countries, led a multinational European documentary workshop for CILECT, the international association of film schools. As Visiting Professor at New York University's Tisch School of the Arts, he taught idea development, directing, and advanced production. When he retired 2001 to write full-time, Columbia renamed its documentary center "The Michael Rabiger Center for Documentary.” In 2002 he was made Honorary Professor at the University of Buenos Aires, Argentina; in 2003 awarded the 2003 Preservation and Scholarship Award by the International Documentary Association in Los Angeles; in 2005 the Genius Career Achievement Award by the Chicago International Documentary Festival, and also in 2005 was made Professor Emeritus by Columbia College Chicago. He is the author of the enormously successful, Directing: Film Techniques and Aesthetics (Focal Press), now in its fourth edition, and Directing the Documentary (Focal Press), now in its fifth edition. He is also the author of Developing Story Ideas (Focal Press), currently in its second edition. He is currently writing a biography of Thomas Hardy.