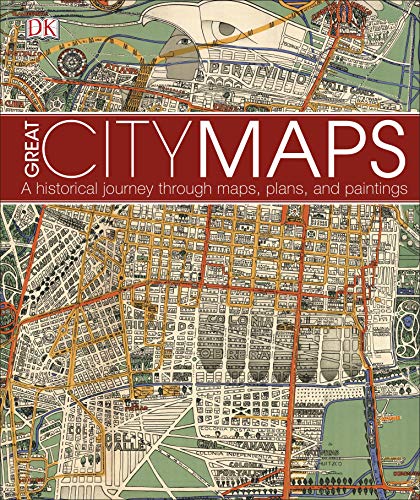 Professor Jeremy Black MBE Professor of History at Exeter University, Jeremy Black graduated from Cambridge University with a Starred First, and did graduate work at Oxford University before teaching at the University of Durham, and from 1996 at Exeter. His two major fields of scholarship are military history and the history of cartography. Recent books include War and Technology, Rethinking World War Two, and Metropolis. He has held visiting chairs at a number of American institutions, including West Point, and received the Samuel Eliot Morison Prize from the Society for Military History in 2008.

"A perfect companion to [DK]'s 2014 Great Maps, but also a worthwhile stand-alone purchase, especially where cartography books are needed that serve YA as well as adult patrons." — Library Journal (Starred Review)

Book Description Dorling Kindersley Ltd, United Kingdom, 2016. Hardback. Condition: New. Language: English. Brand new Book. Journey back in time and take a walk through the historic streets of the world's greatest cities.Great City Maps is the companion title to DK's Great Maps and takes a focused look at over 70 gorgeously illustrated historical maps and plans of cities around the globe. Dive into the detail of each beautiful map and learn about interesting features with visual tours of the maps' highlights - such as the Old London Bridge of London in 1572 and the orchards of Brooklyn in 1767 New York.Cities are centres of civilisation and the way their maps portray them reflects their politics, religion, and culture. See how certain cities, and cartographic techniques, changed over time. More than just a bird's-eye-view, this unputdownable book tells the tales behind the cities from the hubs of ancient peoples to modern mega-cities, and profiles the iconic cartographers and artists who created each map. Perfect for history, geography, and cartography enthusiasts and a stunning gift for armchair explorers of all ages, Great City Maps is your window into the world's most fascinating cities. Seller Inventory # AAZ9780241238981

Book Description 2016. Hardcover. Condition: New. Hardcover. Step onto the streets of cities around the world, and understand the cultures and civilizations that created them with Great City Maps. With a foreword by Professor Jeremy Black, this beau.Shipping may be from multiple locations in the US or from the UK, depending on stock availability. 256 pages. 1.750. Seller Inventory # 9780241238981

Book Description 2016. Hardcover. Condition: New. Hardcover. Step onto the streets of cities around the world, and understand the cultures and civilizations that created them with Great City Maps. With a foreword by Professor Jeremy Bla.Shipping may be from our Sydney, NSW warehouse or from our UK or US warehouse, depending on stock availability. 256 pages. 1.750. Seller Inventory # 9780241238981