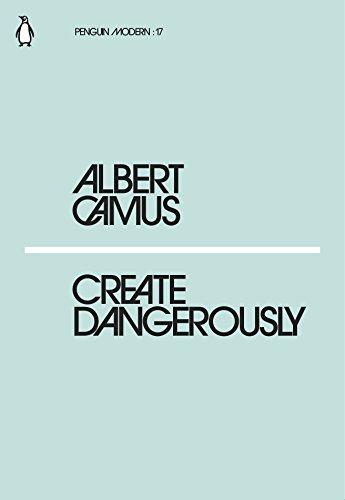 French novelist, essayist, and playwright. Albert Camus (1913-1960) was a representative of non-metropolitan French literature. His origin in Algeria and his experiences there in the thirties were dominating influences in his thought and work. Among his works, The Plague (1947), The Just (1949) The Fall (1956). He was killed in a road accident in 1960. His last novel, The First Man, unfinished at the time of his death, appeared for the first time in 1994.

Book Description Penguin Books Ltd, United Kingdom, 2018. Paperback. Condition: New. Language: English. Brand new Book. 'To create today is to create dangerously'Camus argues passionately that the artist has a responsibility to challenge, provoke and speak up for those who cannot in this powerful speech, accompanied here by two others.Penguin Modern: fifty new books celebrating the pioneering spirit of the iconic Penguin Modern Classics series, with each one offering a concentrated hit of its contemporary, international flavour. Here are authors ranging from Kathy Acker to James Baldwin, Truman Capote to Stanislaw Lem and George Orwell to Shirley Jackson; essays radical and inspiring; poems moving and disturbing; stories surreal and fabulous; taking us from the deep South to modern Japan, New York's underground scene to the farthest reaches of outer space. Seller Inventory # AAZ9780241339121

Book Description PENGUIN UK, 2018. Paperback. Condition: New. Paperback. 'To create today is to create dangerously. Any publication is an act, and that act exposes one to the passions of an age that forgives nothing'Camus's powerful essay, which is as important.Shipping may be from multiple locations in the US or from the UK, depending on stock availability. 64 pages. 0.050. Seller Inventory # 9780241339121