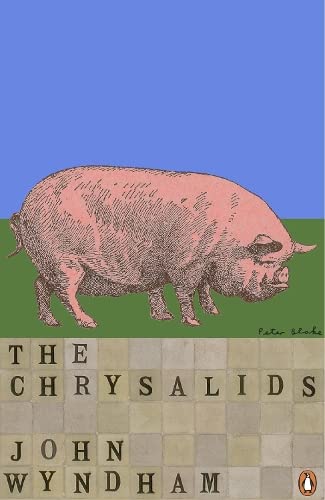 John Wyndham Parkes Lucas Benyon Harris was born in 1903, the son of a barrister. He tried a number of careers including farming, law, commercial art and advertising, and started writing short stories, intended for sale, in 1925. From 1930 to 1939 he wrote short stories of various kinds under different names, almost exclusively for American publications, while also writing detective novels. During the war he was in the Civil Service and then the Army. In 1946 he went back to writing stories for publication in the USA and decided to try a modified form of science fiction, a form he called 'logical fantasy'. As John Wyndham he wrote The Day of the Triffids, The Kraken Wakes, The Chrysalids, The Midwich Cuckoos (filmed as Village of the Damned), The Seeds of Time, Trouble with Lichen, The Outward Urge, Consider Her Ways and Others, Web and Chocky. John Wyndham died in March 1969.

"John Wyndham’s The Chrysalids anticipates and surpasses many of today’s dystopian thrillers....The Chrysalids explores intolerance and bigotry with satisfying complexity as it races toward an ending that is truly unpredictable." —The Seattle Times

"One of the most thoughtful post-apocalypse novels ever written. Wyndham was a true English visionary, a William Blake with a science doctorate." -- David Mitchell

"It is quite simply a page-turner, maintaining suspense to the very end and vividly conjuring the circumstances of a crippled and menacing world, and of the fear and sense of betrayal that pervade it. The ending, a salvation of an extremely dubious sort, leaves the reader pondering how truly ephemeral our version of civilization is..." --The Boston Globe

“[Wyndham] was responsible for a series of eerily terrifying tales of destroyed civilisations; created several of the twentieth century's most imaginative monsters; and wrote a handful of novels that are rightly regarded as modern classics.” –The Observer (London)

“Science fiction always tells you more about the present than the future. John Wyndham's classroom favourite might be set in some desolate landscape still to come, but it is rooted in the concerns of the mid-1950s. Published in 1955, it's a novel driven by the twin anxieties of the cold war and the atomic bomb...Fifty years on, when our enemy has changed and our fear of nuclear catastrophe has subsided, his analysis of our tribal instinct is as pertinent as ever.” –The Guardian (London)

“[A]bsolutely and completely brilliant...The Chrysalids is a top-notch piece of sci-fi that should be enjoyed for generations yet to come.” –The Ottawa Citizen

“John Wyndham's novel The Chrysalids is a famous example of 1950s Cold War science fiction, but its portrait of a community driven to authoritarian madness by its overwhelming fear of difference - in this case, of genetic mutations in the aftermath of nuclear war - finds its echoes in every society.” –The Scotsman

“The Chrysalids comes heart-wrenchingly close to being John Wyndham's most powerful and profound work.” –SFReview.net

“Re-Birth (The Chrysalids) was one of the first science fiction novels I read as a youth, and several times tempted me to take a piggy census. Returning to it now, more than 30 years later, I find that I remember vast parts of it with perfect clarity...a book to kindle the joy of reading science fiction. –SciFi.com

“A remarkably tender story of a post-nuclear childhood...It has, of course, always seemed a classic to most of its three generations of readers...It has become part of a canon of good books.” –The Guardian, September 15, 2000

Book Description Paperback. Condition: Very Good. Item is in very good condition. If supplemental codes/CDs for textbooks are required please contact us prior to purchasing as they may be missing. Photos are stock pictures and not of the actual item. Seller Inventory # DS-024195004X-2

Shipping: US$ 29.32
From United Kingdom to U.S.A.
Destination, rates & speeds

Shipping: US$ 29.32
From United Kingdom to U.S.A.
Destination, rates & speeds