Items related to The Texas Rangers: Notes from the Architectural Underground

Caragonne, Alexander The Texas Rangers: Notes from the Architectural Underground

The Texas Rangers: Notes from the Architectural Underground 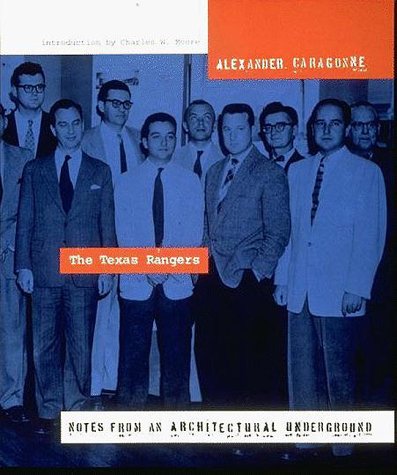 Introduction by Charles W. Moore
Between 1951 and 1957, a group of young men came to teach at the University of Texas School of Architecture in Austin. These "Texas Rangers," as they later came to be called - Bernhard Hoesli, Colin Rowe, John Hejduk, Robert Slutzky, Lee Hodgden, John Shaw, and Werner Seligmann, among others - created an unprecedented teaching program that challenged the important pedagogies of the time, and that contained in large part the origins and explanations for a postmodern revolution in architecture. Ten years in the making, Alexander Caragonne's lively, fully illustrated story documents one of the most significant chapter in the history of postwar American architectural education.

Challenging the anti-intellectual tendencies both of the pragmatic, regionalist American tradition and of the modernist pedagogy inspired by the Bauhaus, the new curriculum proposed that a workable, useful body of architectural theory could be derived from an ongoing critique of significant buildings and projects across history and cultures. Visualization and organization of architectural space was emphasized over the shaping of mass, along with the recognition and development of the architectural idea. Gestalt psychological concepts for evaluating and describing architectural form and space were encouraged, and the value of historical precedent in the design process recognized.

Caragonne pulls together the disparate strands of a program - a critique of a mainstream architectural culture and education - that has for many years remained a kind of dimly perceived underground. Figuring largely in his account are the mythical figure of Colin Rowe and Bernhard Hoesli, whose collaboration provided the intellectual basis of the new curriculum. Caragonne, who witnessed the events as an undergraduate in the School of Architecture, describes Rowe's background and his reintroduction of architectural history into the design studio. He also provides a detailed analysis of the teaching program and its subsequent influence on architectural education and thought.

Alexander Caragonne, AIA, is an architect and writer living in Berkeley, California.

"Centered around the charismatic figure of Colin Rowe, an English architect and former student at the University of Liverpool, a critic and theorist of the generation of James Stirling, Colin St. John Wilson, Robert Maxwell, and Alan Colquhoun, The Texas Rangers reconstructs the peculiar conjuncture of high formalism, modernism, revived historicism and regionalism that informed this group, and pieces together the original curriculum they forged. It is a history of critical interest to the subsequent development of architectural teaching, theory, and practice in England and the United States." - Anthony Vidler, Professor and Chair of the Department of Art History at the University of California, Los Angeles