Items related to Holding the Center: Memoirs of a Life in Higher Education

Johnson, Howard W. Holding the Center: Memoirs of a Life in Higher Education

Holding the Center: Memoirs of a Life in Higher Education 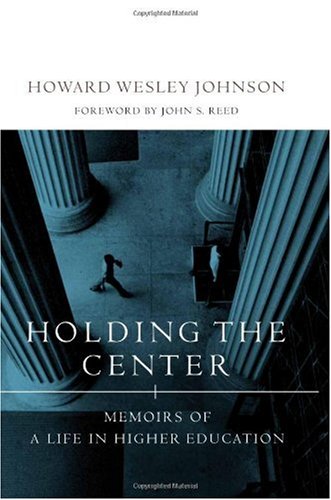 Howard Wesley Johnson has been associated with MIT for more than forty years and been a major influence on the modernization and expansion of many of its programs. He will be most remembered as a management educator and as MIT's president during the turbulent late 1960s and early 1970s. The title of his memoirs reflects his central, usually lonely position in those days, trying to hold together an institution often torn apart by the turmoil of the times.

Johnson was more successful at navigating the minefields on campus than were many other college and university presidents, perhaps because he was always willing to listen to both sides and because his values were in the right place—against the war in Vietnam, in favor of increased participation in the university by women and minorities, and concerned about environmental issues.

As a professor and administrator at MIT, a corporate director, and an advisor to American government agencies and to museums and foundations, Johnson consistently sought both to understand and to apply the principles of good management.

Howard Wesley Johnson is President Emeritus and former Chairman of the Corporation of the Massachusetts Institute of Technology.

Johnson has been associated with the Massachusetts Institute of Technology for over 40 years, most memorably as president from 1966 through the early 1970s. From his youth in Chicago through his academic career, Johnson notes certain events that prepared him for his role as an administrator. His stint in World War II also provided him with lessons, such as learning how to live under pressure and having "compassion in the midst of disaster." One of Johnson's early accomplishments at MIT was the Senior Executive Program. Johnson also found himself involved in NASA's Apollo Project; MIT helped with guidance and navigation systems. Next came the opportunity to begin a medical school, a major step for MIT. Antiwar demonstrations in colleges across the nation soon followed. Johnson's office was occupied by student demonstrators, but MIT was fortunate not to be a prime target for radicals. Johnson's memoir of life at the center of a turbulent university, too detailed at times, will be of interest primarily to those in the academic world.ATerry A. Christner, Hutchinson P.L., KS
Copyright 1999 Reed Business Information, Inc.

1. Holding the Center: Memoirs of a Life in Higher Education

2. Holding the Center: Memoirs of a Life in Higher Education Johnson, Howard W.