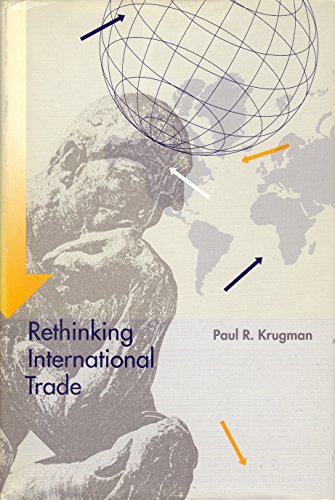 Over the past decade, a small group of economists has challenged traditional wisdom about international trade. "Rethinking International Trade provides a coherent account of this research program and traces the key steps in an exciting new trade theory that offers, among other possibilities, new arguments against free trade. Krugman's introduction is a valuable guide to research that has delved anew into the causes of international trade and reopened basic questions about the international pattern of specialization, the effects of protectionism, and what constitutes an optimal trade policy In the four sections that follow, he takes a revisionary look at the causes of international trade, and discusses growth and the role of history, technological change and trade, and strategic trade policy. Essays in part I review and challenge the theories of Ricardo and his successors, rethinking a 160-year tradition of looking at international trade. Models are presented in which trade frequently arises because of opportunities to exploit increasing returns through exports rather than from comparative advantage. In part II, Krugman traces the resulting pattern of trade specialization not only to the influence of comparative advantage but also to more arbitrary factors such as historical events, the rachet effect of cumulative processes, technological changes, and temporary economic shocks. Part III expands on the theme of technological change as a key factor in determining the pattern of specialization in international trade and addresses questions about the effects of innovation, or lack of it, on a country's international trade position. The concluding essays examine the issue of protectionismalong with other elements of trade policy, showing how protectionist policies, used as an export enhancement device by some national governments, may shift world specialization to the advantage of the protectionist nations. Paul R. Krugman is Professor of Economics at MIT.

Paul Krugman is Professor of Economics and International Affairs at Princeton University and a New York Times columnist. He was awarded the Nobel Prize for Economics in 2008.

Paul Krugman is probably the most innovative and influential international trade theorist of the 1980s. This collection of his papers establishes him as the youngest elder statesman in this area.

Paul Krugman defines the frontier in modern trade theory. To stay ahead of the crowd read his latest work.

Paul Krugman is probably the most innovative and influential international trade theorist of the 1980s. This collection of his papers establishes him as the youngest elder statesman in this area.