Items related to A History of Electricity and Magnetism

Meyer, Herbert W. A History of Electricity and Magnetism

A History of Electricity and Magnetism 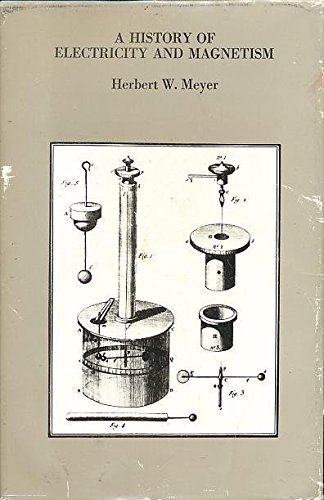 Written so as to be understood by the non-technical reader who is curious about the origin of all the electrical and electromagnetic devices that surround him, this history also provides a convenient compendium of information for those familiar with the electrical and magnetic fields. The book moves along at a rapid pace, as it must if it is to cover the enormous proliferation of developments that have occurred during the last hundred years or so.

The author has struck a workable balance between the human side of his story, introducing those biographical details that help advance it, and its technical side, explaining theories and "how things work" where this seems appropriate. He also achieves a balance in recounting the discovery of basic scientific principles and their technological applications—the myriad of devices and inventions that utilize energy and information in electromagnetic form.

Indeed, one of the important themes of the book is the close and reciprocal relationship between science and technology, between theory and practice. Before approximately 1840, the purely scientific investigations of electrical and magnetic phenomena were largely ad hoc and observational, and essentially no technology based on them existed. Afterwards, the scientific explorations became more programmatic and mathematical, and technical applications and inventions began to be produced in great abundance. In return, this technology paid its debt to pure science by providing it with a series of measuring instruments and other research devices that allowed it to advance in parallel.

1. A History of Electricity and Magnetism

2. A History of Electricity and Magnetism

3. A HISTORY OF ELECTRICITY AND MAG

4. A HISTORY OF ELECTRICITY AND MAG