Items related to Charles Platt: The Artist as Architect (Architectural... 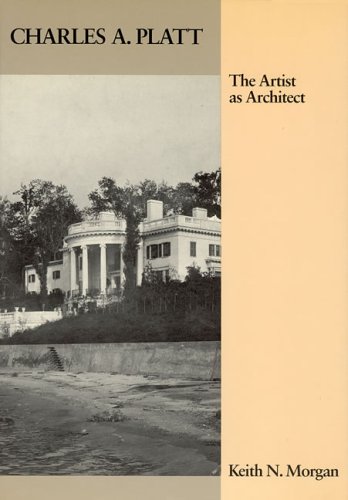 It was once common to discuss the work of Charles Platt (1861-1933) alongside that of McKim, Mead & White, but by the time of his death, Platt's name had already fallen out of favor under the influence of modern movement critics.

This long-overdue reevaluation of Platt's career shows that in the first decade of this century, Platt's office was one of the New York firms that dominated the general development of American architecture, and his country houses and Georgian style mansions were regarded as the best American examples of their genre. He led the American revival of the formal garden in the 1890s, and is credited with having introduced the American villa theory in his book Italian Gardens (1894). Morgan notes that Platt first achieved a reputation for his accomplished landscape paintings and etchings, and his conception of building and garden design grew out of this training rather than the formal Beaux-Arts curriculum subscribed to by most of his successful contemporaries.

The book treats Platt's work in five chapters: his study of art at the National Academy of Design in New York and in Paris where he exhibited in salons and garnered awards as a landscape painter; the impact of his work on Italian gardens; his large-scale country estates and domestic buildings, where the Italian precedents were adjusted to local conditions; his public architecture and urban commissions, which include the freer Art Gallery in Washington, D.C., the Vincent Astor estate in New York, and the campuses of the University of Illinois, the Connecticut College for Women, Deerfield Academy, and Philip's Academy in Andover.

1. CHARLES A. PLATT. THE ARTIST AS ARCHITECT