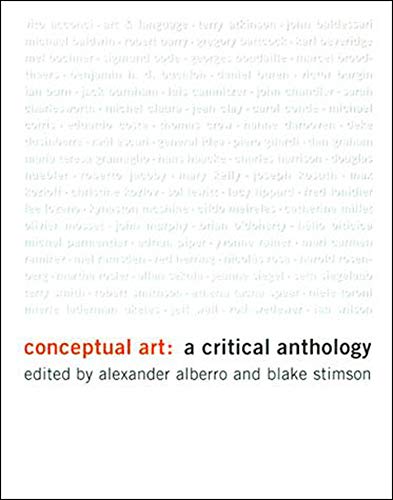 This landmark anthology collects for the first time the key historical documents that helped give definition and purpose to the conceptual art movement.

Compared to other avant-garde movements that emerged in the 1960s, conceptual art has received relatively little serious attention by art historians and critics of the past twenty-five years―in part because of the difficult, intellectual nature of the art. This lack of attention is particularly striking given the tremendous influence of conceptual art on the art of the last fifteen years, on critical discussion surrounding postmodernism, and on the use of theory by artists, curators, critics, and historians.

This landmark anthology collects for the first time the key historical documents that helped give definition and purpose to the movement. It also contains more recent memoirs by participants, as well as critical histories of the period by some of today's leading artists and art historians. Many of the essays and artists' statements have been translated into English specifically for this volume. A good portion of the exchange between artists, critics, and theorists took place in difficult-to-find limited-edition catalogs, small journals, and private correspondence. These influential documents are gathered here for the first time, along with a number of previously unpublished essays and interviews.

Alexander Alberro is Virginia Bloedel Wright Professor of Art History at Barnard College. He is the author of Conceptual Art and the Politics of Publicity and the coeditor of Conceptual Art: A Critical Anthology, both published by The MIT Press.

These two compilations, one a show catalog, the other an anthology of artists' writings, review one of the most contested movements in 20th-century art. While the editors may quibble over certain key pointsAsuch as the founding moment of conceptualismAtheir works largely complement rather than contradict each other. In Conceptual Art, art history professors Alberro and Stimson present a rich history of the American branch through the writings of Joseph Kosuth, Lucy Lippard, the Art & Language collective, and dozens of others. The editors' selections concentrate on the manifestos and critiques produced during the movement's formative years from 1966 to 1977Ain fact, they seem to regard later artists as impure hangers-onAbut they also have included memoirs and a few retrospective histories. In addition, two introductions trace the movement's history and analyze the true aims of the adherents. Reading these primary texts is essential to understanding such an intellectually grounded movement; one only hopes a more affordable paperback will be issued for students. The catalog to a show that will be moving from New York to Minneapolis and Miami, Global Conceptualism aims to broaden our understanding of conceptual art by showing its varied manifestations in different cultures at different times. The show's organizers are careful to indicate that these manifestations are not necessarily part of a cohesive whole, intimating instead that conceptualism is a logical response to certain political conditions that have reappeared in various places. Reinforcing this basic understanding, the book presents 11 geographically oriented essays. The pieces are always informative, but their parameters vary widely, and the quality of the writing is rather uneven. These are supplemented by 70 pages of plates, a chronology, and brief biographies of the artists. Neither book is for the uninitiated, thanks largely to the complexity of the subject matter, but they are both clear and unique contributions. All academic and large public libraries should stock both.AEric Bryant, "Library Journal"
Copyright 1999 Reed Business Information, Inc.