Items related to Postwar Economic Reconstruction and Lessons for the... 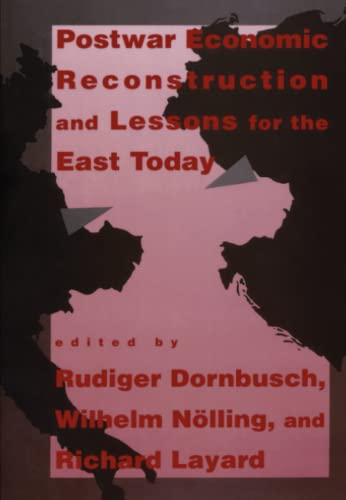 The breakup of the Soviet Union and the consequent extraordinary problems faced by Eastern European nations raise pressing economic questions. The case studies in this book examine significant parallels between the situation in Eastern Europe today and the issues facing Europe and Japan after World War II, offering insights on what kinds of policy actions will be most effective in this difficult period of reconstruction. The essays address such topics as the relative roles of government and the market; economic openness; industrial conversion from war to peacetime production; the roles of institutions, enterprises, the business community, and their work staffs; and external control of policy measures, of resources made available by the outside world, and of the general external environment. In their introductory chapter, the editors provide an overview that addresses the question of whether reconstruction can ever be managed smoothly. Rudiger Dornbusch is Professor of Economics at the Massachusetts Institute of Technology. Wilhelm Nolling is President of the Landeszentral Bank in Hamburg, Germany. Richard Layard is Professor of Economics at the London School of Economics.Contents: Openness, Wage Restraint, and Macroeconomic Stability: West Germany's Road to Prosperity 1948-1959, H. Giersch, K. H. Paqué, M. Schmieding. The Lucky Miracle: Germany 1945-1951, H. Wolf. Inflation and Stabilization in Italy 1946-1951, M. De Cecco and F. Giavazzi. Economic Reconstruction in France 1945-1958, G. Saint-Paul. Reconstruction and the U.K. Postwar Welfare State: False Start and New Beginning, P. Minford. A Perspective on Postwar Reconstruction in Finland, J. Paunio. The Reconstruction and Stabilization of the Postwar Japanese Economy, K. Hamada and M. Kasuya. The Marshall Plan: History's Most Successful Structural Adjustment Program, J. B. De Long and B. Eichengreen. Lessons for Eastern Europe Today, 0. Blanchard, R. Portes, W. Nolling.

Rudiger Dornbusch is Professor of Economics at the Massachusetts Institute of Technology.

These essays review the experience of economic recovery after World War II of Western Europe (plus Finland and Japan) in the search for lessons applicable to the former Soviet Union and its satellites under their new freedom. Not all the views presented converge, but they provide a fascinating review of past experience, a rich menu for choices among foreign aid and domestic policies, if perhaps not a detailed guide to optimal tactics and strategy.

This valuable collection brings together some of the best recent estimates of the impact of Marshall Plan aid for West European economic recovery after World War II. The diverse conclusions rightly show how difficult it is to nail down the factors behind Europe's post-war growth; but the editors argue convincingly that a Marshall Plan for Eastern Europe is a wager worth making.

2. Postwar Economic Reconstruction and Lessons for the East Today

3. Postwar Economic Reconstruction and Lessons for the East Today