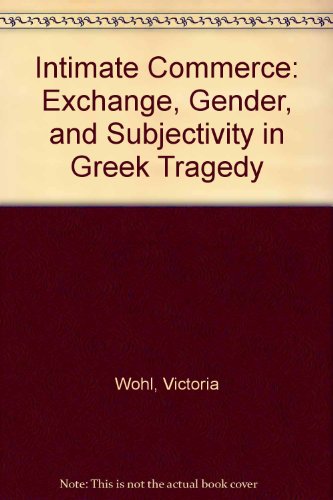 Exchanges of women between men occur regularly in Greek tragedy—and almost always with catastrophic results. Instead of cementing bonds between men, such exchanges rend them. They allow women, who should be silent objects, to become monstrous subjects, while men often end up as lifeless corpses. But why do the tragedies always represent the transferal of women as disastrous?

Victoria Wohl offers an illuminating analysis of the exchange of women in Sophocles' Trachiniae, Aeschylus' Agamemnon, and Euripides' Alcestis. She shows how the attempts of women in these plays to become active subjects rather than passive objects of exchange inevitably fail. While these failures seem to validate male hegemony, the women's actions, however futile, blur the distinction between male subject and female object, calling into question the very nature of the tragic self. What the tragedies thus present, Wohl asserts, is not only an affirmation of Athens' reigning ideologies (including its gender hierarchy) but also the possibility of resistance to them and the imagination of alternatives.

"An important new work from the perspective of gender (rather than exclusively feminist) theory, this volume should appeal to professors and graduate students in the classics."- Choice

Book Description University of Texas Press, 1998. Condition: Good. A+ Customer service! Satisfaction Guaranteed! Book is in Used-Good condition. Pages and cover are clean and intact. Used items may not include supplementary materials such as CDs or access codes. May show signs of minor shelf wear and contain limited notes and highlighting. Seller Inventory # 0292791135-2-4