Items related to Witkacy: Stanislaw Ignacy Witkiewicz as an Imaginative... 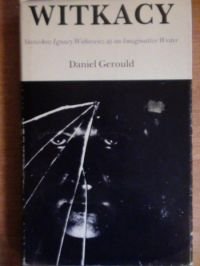 The brilliant dramatist-novelist-portraitist Stanislaw Ignacy Witkiewicz made up the name Witkacy to distinguish himself from his well-known father, a realist painter in Russian Poland. Largely the product of his father's determined educational theories, Witkacy struggled to form his own individuality and follow his own instincts. As a result he was to become a major figure in the European avant-garde of the inter-war period, though recognition came only posthumously, first in Poland after the liberalization of 1956, then in Europe and America during the 1960s and 1970s.

In this perceptive, multifaceted study of Witkacy as a imaginative writer, Daniel Gerould approaches the plays and novels individually and reveals how the playwright-novelist developed the skills to blend together all the complex ingredients of his remarkable works. Also adept at painting, music, philosophy, and mathematics, Witkacy combined this knowledge with amazing imaginative energy to create a radically nonrealistic theater that anticipated the theater of the absurd by two decades. Although certain writers such as Shakespeare, Strindberg, and Conrad influence him deeply, he was compelled to picture them as part of a past that was disintegrating.

Living in Poland, on the margin between feudalism and industrialism, East and West, past and future, Nazism and communism, Witkacy was constantly torn between opposing worlds. In September 1939, Witkacy tragically ended his own life. As Gerould points out, he was "both behind the times and ahead of them, with one foot in the 1890s and the other in the last quarter of the twentieth century."